Roger Penske has his limits. Kurt Busch has finally exceeded them. 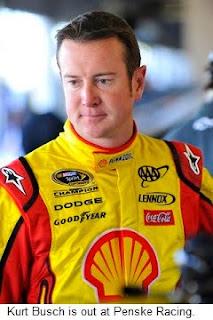 Multiple sources confirm what the Charlotte Observer and ThatsRacin.com reported earlier today; that Penske Racing has fired the volatile NASCAR Sprint Cup Series driver for his expletive-filled tirade against ESPN pit reporter Dr. Jerry Punch at Homestead Miami Speedway two weeks ago. The firing comes approximately six years after Busch was terminated by Roush Fenway Racing after being cited for reckless driving in Avondale, Ariz., and engaging in a verbal confrontation with Maricopa County Sheriff's Deputies.

A spokesperson for the team declined to confirm Busch's firing today, but multiple sources say Busch has been informed that he will not return next season. An official announcement is expected Monday.

There is no word on who will replace Busch at the wheel of the #22 Shell Pennzoil Dodge, which finished 11th in Sprint Cup Series points this season with two wins, eight Top-5 and 16 Top-10 finishes in 36 starts. A handful of drivers -- including David Reutimann, David Ragan and Brian Vickers -- remain unsigned for the 2012 campaign, and could replace Busch and Penske Racing. The Las Vegas native will have a more difficult time finding competitive employment next season, with the vast majority of championship contending seats already filled.

NASCAR fined Busch $50,000 for his abuse of Punch, which was captured by a fan's cell phone and widely viewed on YouTube in the days following the incident. Penske Racing issued a statement the following week calling Busch's actions "inconsistent with the company’s standards for behavior, respect for others and professionalism," adding that the matter was under internal review.

The termination is eerily similar to his departure from Roush Fenway Racing in November of 2005, when he was pink-slipped with two races remaining after what team president Geoff Smith called "vituperative abusiveness" to law enforcement officials during a traffic stop near Phoenix International Raceway. Busch had already announced plans to leave the team at season's end to drive for Penske.
Posted by Dave Moody at 9:49 PM