It's Official: Busch Out At Penske Racing 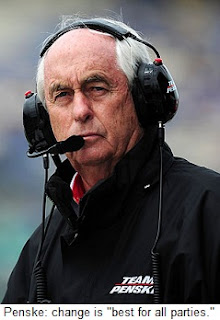 Penske Racing announced today that it has reached a mutual agreement with driver Kurt Busch to end its driver/race team relationship, effective immediately.

The team will evaluate its options for the driver of the No. 22 Sprint Cup Series car in the future while Busch will seek new opportunities with another race team.

"I appreciate the victories that Kurt has brought Penske Racing and our sponsors over the past six years," said Roger Penske. "While I am disappointed that Kurt will not be racing for our team in the future, both Kurt and I felt that separating at this time was best for all parties, including our team and sponsors. I wish Kurt the best in his future racing endeavors."

“I am grateful to Penske Racing for six very productive years," said Busch. "Together, we won a lot of races; 16 in all. I’m proud that we won on a variety of tracks and this past season reached Victory Lane four times. Another highlight was pushing my teammate to a Daytona 500 win. I also appreciate the lasting friendships I’ve made while working with our great sponsors through the years, including Miller Lite, Shell and Dodge."

Busch called the decision to part company "a positive step for me. Over the Thanksgiving holiday, I took time to reflect on what is most important to me and realized I need to find a way to put the fun back into racing. It’s time for a fresh start. Leaving a great organization and a lucrative contract is not easy, but it allows me to take a deep breath and work on things that can make me a better driver and a better person.

"I recognize the passion and emotion that have helped me succeed on the track need to be better channeled off the track. The past few months, I began working with a sports psychologist to help me better deal with my emotions, especially following moments of frustration during competition. I never want to take for granted that it’s a privilege to earn a living as a NASCAR driver. As I begin this new chapter in my career, I’m excited about the future and committed to making the changes necessary for me to enjoy racing again, to compete for championships and to better represent NASCAR, my sponsors, my team and my fans.

“I want to personally thank Roger Penske for the opportunity he gave me and for his friendship, which will continue long into the future.”

While the Penske statement made no mention of either Shell or Pennzoil, sources close to the team say both sponsors approved Busch's departure from the team, and will remain on the #22 Dodge in 2012 and beyond. There is no official word on Busch's replacement, though former Roush Fenway Racing driver David Ragan is believed to be the leading candidate.
Posted by Dave Moody at 10:50 AM