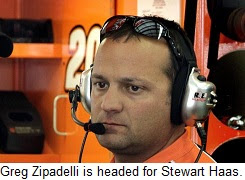 Zipadelli has served as crew chief for Joey Logano’s #20 Home Depot Toyota since 2009, finishing 24th in championship points last season. His contract with JGR runs through the 2012 season, but multiple sources say he has negotiated an early release, in order to rejoin former driver Tony Stewart at Stewart Haas Racing. SHR has functioned without a Competition Director since the midpoint of the 2011 campaign, when veteran Bobby Hutchens was released.

Zipadelli will reportedly be replaced by Jason Ratcliff, who has led JGR’s #18 NASCAR Nationwide Series team for the last six seasons. He has been with the team since 2000, and won the Nationwide series championship with driver Kyle Busch in 2009, and the owner’s title in 2010 with a number of drivers sharing time at the wheel..
Posted by Dave Moody at 11:06 AM