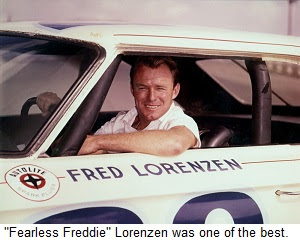 Elmhurst, Ill. native and 1965 Daytona 500 winner Fred Lorenzen was honored by the Illinois General Assembly today at Chicagoland Speedway for his accomplishments as a NASCAR driver between 1958-1972.

“Fred Lorenzen was an icon of NASCAR and the racing world,” said Illinois State Representative Dennis Reboletti. “He is an Illinois sports legend and we recognize him for his lifetime of accomplishments.”

“Fred Lorenzen is a true NASCAR and Illinois sports legend, and we’re thrilled to be a part of today’s presentation honoring his accomplishments,” said Scott Paddock, Chicagoland Speedway president. “Fred was one of the first pioneers of NASCAR and his contributions have helped to make it the great sport that is today.”

Lorenzen has struggled in recent years with dementia brought on by Alzheimer's disease. He was unable to attend Wednesday's ceremony due to ill health, but was represented by daughter Amanda and son Chris.

Also in attendance at the press conference were two of Lorenzen’s old friends from his days at Holman-Moody Racing; Charlie ‘Slick’ Owens and Waddell Wilson. Owens spoke about Lorenzen’s impact in the world of racing and NASCAR, saying, “Freddie knew every piece of the race car. He worked on it, cleaned it and he never bragged about anything. He just went out and did what he had to do, and that was race.”

Wilson added, “Freddie taught me great ethics about racing. He was one of the highlights of my life. I look back at all the great things we’ve done, and even before I worked for him, I idolized him. He was my hero; he still is.”

Earning the nicknames “Fearless Freddie” and “Golden Boy,” Lorenzen recorded 26 wins in his NASCAR career and is still the only NASCAR driver to win 20 races in his first 100 starts. He also became the first driver to earn more than $100,000 in winnings in a single season, claiming $113,570 driving for the legendary Holman-Moody team in 1963.