NASCAR driver Greg Biffle will help Natural Balance Pet Foods make a “splash” in the upcoming 123rd Rose Parade on January 2nd, 2012. In 2010 the Natural Balance float rolled into the Guinness Book of World records as the world’s longest float and in 2011, took the record for the world’s heaviest float. 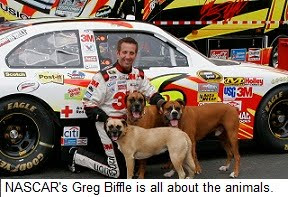 This year the Natural Balance float will be 116 feet long and feature a tropical floral setting. After extensive training, the dogs on the float will actually surf on 65-foot long waves in over 6,600 gallons of water on a float weighing more than 100,000 pounds. A specially designed “wave” machine is incorporated into the design of the float and creates a wave every minute.

The Rose Bowl Parade will air live from Pasadena, Calif. on ABC at 11:00 a.m. EST. Check out Biffle and Tillman, the World’s Fastest Skateboarding Bulldog at www.GregBiffle.com and get a sneak peek at the building of the float at www.naturalbalanceinc.com.

“I can’t wait to see the float,” said Biffle. “I’ve heard a lot about this year’s float and I’ve seen video of the floats from the last couple of years. Tillman came to our shop at Roush Fenway Racing last month and we got to see him skateboard. I heard he’ll be surfing on the float this year so I can’t wait to see that. It was definitely an honor to be asked to ride on the Natural Balance float because we share the same passion for the well-being of animals.”

In addition to the ABC broadcast, the 123rd Rose Parade will be broadcast on the Hallmark Channel, HGTV, KTLA (Tribune), NBC, RFD-TV and Univision. The Parade is also seen in more than 200 international territories and countries.

The Natural Balance float is 54th out of 91 parade entries. It is preceded by a high-school band and succeeded by the Southern California Peruvian Paso Horse Club Riders. The parade will make an unprecedented pause for 45 seconds when the Natural Balance Float, a float of "high visual interest", passes the viewing stand, in order to ponder "dogs that surf". For the very first time in Rose Parade history there will be a robotic camera on the float, which will be powered by Ford's latest version of the 6.8L 3v engine.
Posted by Dave Moody at 5:40 PM