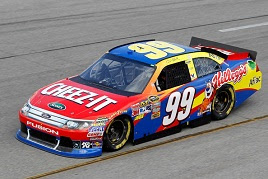 Roush Fenway Racing and Kellogg Company have announced a multi-year extension of their NASCAR partnership. Kellogg will serve as a primary sponsor of the No. 99 Ford for four Sprint Cup races in 2012, teaming Kellogg’s Frosted Flakes cereal and Cheez-It crackers with championship contender and fan favorite Carl Edwards.

Kellogg has been involved with NASCAR for many years, including serving as a primary sponsor of the No. 99 Ford with Roush Fenway for the past two seasons. Edwards finished as runner up in the 2011 Chase for the Sprint Cup and has accumulated 19 wins during his Sprint Cup career. He also has 89 top-five finishes, 144 top-10 finishes and 10 pole awards in just over 250 starts.

Edwards has secured a position in the Chase for the Sprint Cup NASCAR “playoff” six times in seven attempts, and finished second in 2008 and 2011. In addition, he won the 2007 Nationwide Series Championship. This season, Edwards and the No. 99 team led the Sprint Cup point standings for 23 of the 36 weeks.

“It’s an honor to be involved with Kellogg,” said Edwards. “They have tremendous commitment to quality in everything they do and racing fans love their products. They are a fun partner to go racing with and I’m excited about continuing the relationship.”

“Our involvement with racing gives us a great opportunity to interact with our consumers in a fun, exciting environment,” said Brad Davidson, president, Kellogg North America. “We are thrilled to extend our relationship with Carl and Roush Fenway Racing, and we look forward to seeing Kellogg’s Frosted Flakes and Cheez-it crackers on the No. 99 car next season.”
Posted by Dave Moody at 11:55 AM