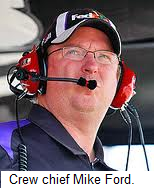 A spokesperson for Joe Gibbs Racing has confirmed published reports that Mike Ford will not return as crew chief for Denny Hamlin's #11 Fed Ex-sponsored Sprint Cup Series Toyota next season. The Associated Press had reported earlier that Ford has been terminated, and that an offer has been extended to 2011 championship winning crew chief Darian Grubb to replace Ford next season. While declining to comment on Grubb, a spokesperson for JGR told Sirius XM NASCAR Radio's Sirius Speedway today, "you are safe to say (Ford) has been released."

Hendrick Motorsports owner Rick Hendrick confirmed recently that Grubb has a standing invitation to return to that organization in 2012, and Grubb said he has other offers from other operations, as well.

After winning eight races and challenging for the series championship a year ago, Hamlin and Ford managed just one victory in 2011. While they qualified for the Chase this season, they were never a contender for the title en route to a ninth place finish in points.

There has been no official confirmation by any of the involved parties.
Posted by Dave Moody at 5:34 PM