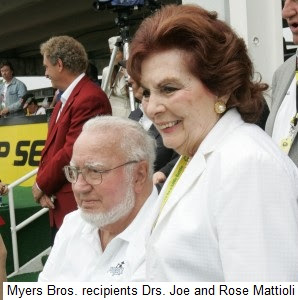 Drs. Joseph and Rose Mattioli, owners and founders of Pocono International Raceway, have been awarded the prestigious Myers Brothers Award for 2011. Voted on each year by the membership of the National Motorsports Press Association (NMPA), the Myers Brothers Award recognizes individuals and/or groups who have provided outstanding contributions to the sport of stock car racing. It is named after two of the sport’s pioneers, Billy and Bob Myers.

The award was presented at the annual NASCAR/NMPA Myers Brothers Awards Luncheon, part of the NASCAR Sprint Cup Series Champion’s Week activities in Las Vegas. The Mattioli’ grandson and Raceway CEO, Brandon Igdalsky accepted the award on behalf of his grandparents, who were unable to attend.

Joe and Rose Mattioli lived their dream of bringing NASCAR racing to Pennsylvania's Pocono Mountains, opening Pocono Raceway in 1968. They hosted their first NASCAR 500-mile race in 1974, introducing fans and drivers to a track that would long be known for its unique shape and racing style. They were always on hand at races, greeting media members and drivers and working tirelessly to improve and enhance their facility and to always keep the fans in mind. A total of 68 NASCAR Sprint Cup Series races have been held at Pocono Raceway. It is the only race track, hosting NASCAR Sprint Cup Series events, that is entirely family owned and operated.

In a prepared statement read by his grandson, Dr. Joe Mattioli said, “Having been a part of NASCAR for most of my life, I am honored that I would be awarded the prestigious Myers Brothers Award. The history of this award is so meaningful to both Rose and I, and knowing the caliber of the past recipients, I am left speechless. As you all know, that doesn't happen too often. Although I would love to be there in person, I am proud that my grandsons Brandon and Nick, who are now running the track after my retirement, are able to accept this prestigious honor on my behalf. I am very humbled – thank you all very much!”

“Dr. Joe and Dr. Rose Mattioli represent the true heart and spirit of NASCAR,” said NMPA President Rea White. “They always recognized that NASCAR was more about people than anything else. Their legacy in the sport goes far beyond the Pocono track they labored to build."