Biffle On Confrontation: "I Should Have Handled It Differently" 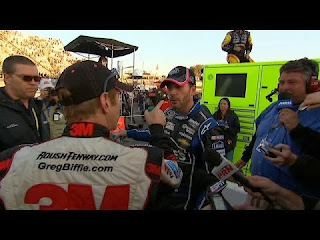 Roush Fenway Racing driver Greg Biffle has apologized to fellow Chase contender Jimmie Johnson for an altercation following Sunday’s “Goody’s Headache Relief Shot 500” at Martinsville Speedway.
Contact between the two drivers with approximately 130 laps remaining left Biffle’s rear bumper cover flapping in the breeze, and NASCAR ordered him to make repairs on pit road.
Biffle confronted Johnson after the race, saying, “Hey, you tore my rear bumper off, you (expletive). You (expletive) ran into the back of me.”
“You better watch it,” said Biffle, wagging his finger in Johnson’s face.


Yesterday, Biffle admitted he should have picked a better time to express his unhappiness.
“I should have handled that a little differently,” said Biffle. “I didn’t realize he was in the middle of his interview. I thought he was talking to some print reporters when I first went over there. I didn’t know he was on camera, so I apologize for that.  I should have acted a little different. I should have waited until he was done and then had my conversation with him in private, with no cameras or media around.”
Biffle also explained that an apology delivered earlier this week via Twitter was directed at Johnson’s fans, rather than Johnson himself.
“I was getting a lot of hate mail on Twitter from all the 48 fans about the way I reacted, so I was apologizing to the fans, not Jimmie Johnson,” he said. “My apology to Jimmie Johnson was on the telephone. I don’t text, I do the old-fashioned telephone.  I was apologizing for the way I handled it.
“The other misconception was, ‘Oh, you should be mad at (Dale Earnhardt, Jr.),’” said Biffle. “`He ripped your bumper off, (not Jimmie Johnson).’  Well, we came in, fixed it and started at the back. The 48 car ran square into the back of my car, not inside of me like he claimed when I came up and talked to him about it. I was upset that I had to start at the back, (ruining) a good opportunity to get a top-three finish at Martinsville for the first time and... probably a chance to battle for the win.  That didn’t transpire and I was a little upset about that.
“Nobody knows this, but we had the fastest car (for) the last 65 laps of that race,” said Biffle. “We closed in on the leader by five seconds from the start of that run to the end of it.  I had to start at the back and drove to ninth.
The Roush Fenway Racing driver said the stress of competing for the championship is difficult for drivers to manage.
“The last 10 weeks coming up to the Chase it’s all you can eat, sleep and think (about). Every moment of every day is whether you’re going to make it or not and how to get your cars better and faster. And if you do make it, (it becomes) `How am I going to win the championship?’
The Sunday after Richmond is probably the best day of your life, because you’ve made the Chase and all the pressure is off,” he said. “But you know that on Monday, you’ve got to figure out how in the world (you are) going to compete in the championship run.
“It is a tough balance, but we enjoy it.”
Posted by Dave Moody at 1:03 PM