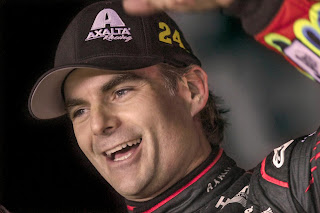 The last four qualifiers each held the pole position for at least a few minutes, but Jeff Gordon gets to keep it. Last night’s final qualifier Thursday at Charlotte Motor Speedway, Gordon knew the pole was up for grabs as speeds climbed higher. He answered the call with a blazing lap in 27.791 seconds (194.308 mph).


“That was an exciting qualifying effort, regardless whether we were on the pole,” Gordon said. “All those cars that were going late and the times just dropping. To go out there and know that the pressure’s on you after the car ahead of you just sits on the pole and you’re battling those guys for the championship … to go out there and get the pole is really exciting. To do it here in Charlotte … I think it’s been a while since we’ve won it here, so man, it feels so good.”
It was Gordon’s ninth pole at Charlotte, his first since 2010, and it was won by the slimmest of margins. In fact, less than a tenth of a second separated the top five qualifiers.
Kasey Kahne turned a fast lap early in Thursday’s qualifying session and held the pole position until the final four drivers of the night: Jimmie Johnson, Greg Biffle, Kevin Harvick and Gordon. Each of those drivers benefited from the late draw and the knowledge gleaned from watching the rest of the field qualify by turning quicker laps than the driver before.
The three who had been edged out in succession each felt he had left something on the race track.
“I felt like I didn’t get everything in (turns) three and four,” Harvick said. “I knew the way practice was going that I had to get everything I could out of one and two and not get tight coming off Turn 4, and I probably lost the pole right there. We would really like to have the pole tonight, but everybody knows how we’ve qualified in the past, and to be on the front row, that’s good for us.”
Fellow title contender Greg Biffle qualified third, saying, “I wasn’t on the pole as long as I wanted to be. I’m very surprised the track had the grip it did. I watched the others guys go and I was using the Kevin Harvick mentality of `don’t try for more than the track will give you.’ And when I came across (turn) three and four, the track had so much grip I barely came out of the gas.
I got all I could in turns one and two (and) it kind of sucked me into three and four thinking it was going to be as good as one and two. I drove down in there and it went straight to the bottom. I was like, `oh I got this.’ Then I went to the gas and it started slipping up the race track.
“Jeff had the best opportunity by watching what everybody else did and where he needed to be.”
Posted by Dave Moody at 2:17 PM