Earnhardt: "Talladega Is A Special Place" 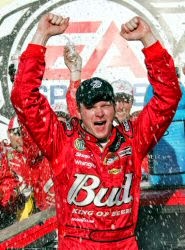 Dale Earnhardt, Jr. is a five-time NASCAR Sprint Cup Series winner at Talladega Superspeedway. His legendary father, Dale Sr., padded his legend with 10 wins at the Alabama speed plant. And Earnhardt, Jr., said today that this track remains a special place in his heart and his memory.


“This race track is really special,” he said. “I enjoy coming here and I remember this was one of my favorites as a kid. When I was young, out of all the tracks that I had the chance to go to, this was definitely one of my favorites to come to. Milling around in the garage during the race, just how big the place was and the cars looked different because of the superspeedway bodies. It was just a really fun experience for me.
“(Talladega) was actually the first race track that I drove on, aside from Myrtle Beach,” said Earnhardt. “I was racing street stocks at Concord (Motor Speedway). They were going from V-6s to V-8s in the Nationwide Series and Dad was down here driving one. Dave Marcis was out here driving Dad’s car and Dad called me at the dealership where I was changing oil. (He) told me to get my helmet and my suit and be at the airport the next morning, and not ask any questions or tell anybody where I was going.
“I didn’t know where I was going,” laughed Earnhardt. “I knew I was going to Talladega, but I didn’t know why. I assumed I was going to drive a race car somewhere, but we got here and he told me to get my stuff on, get in the car and go out and run.
“(He said to) hold it wide-open (and) that it would stick,” he recalled. “I remember going down the back straightaway in that car and wondering if it was really going to stick when I got to the corner, because it just didn’t seem like it was possible.
“This is a real special place,” he said. “My dad won a lot of races here and I’ve had the fortune of being able to get to Victory Lane several times. I think this place will just continue to deliver, year after year, long after I’m gone. It’s just such an impressive track and I really enjoy being here.”
Asked about the thunderous fan reaction whenever he takes the lead at Talladega, Earnhardt said, “If you’ve got one fan or you’ve got thousands of fans, you know that when you put the car in first place… they’re happy. I enjoy that as much as the fan enjoys it. When you see the reaction people get from it, yeah, it’s a great feeling.
“You swear you can hear them, but most of the time you can’t,” he revealed. “But you can definitely see it. Lap after lap going by the grandstand and seeing them sitting down, when you come by and they are standing up, it’s obvious.”
His mission for Sunday? Bring those fans to their feet once again with another Earnhardt charge to the checkered flag.
Posted by Dave Moody at 4:49 PM