For Kenseth, Patience Not A Virtue At Talladega 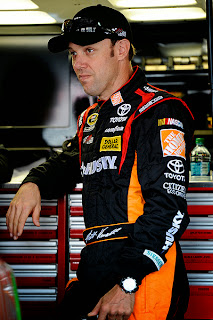 Matt Kenseth doesn’t often get outfoxed on the race track.


One of NASCAR's more cerebral drivers, the 2003 Sprint Cup Series champion is known for saving his car until the end of the race and making his move when it matters most. Sunday at Talladega Superspeedway, however, Kenseth waited too long to play his cards.
He ran patiently in the back of the pack, waiting until just three laps remained before jumping to the wide-open inside lane while running in the 16th position. Only a handful of cars elected to go with him, however, and his bid stalled before ever reaching the Top-10. He drifted slowly backward in the final laps, and when a backstretch crash involving Austin Dillon and Casey Mears ended the race short of its scheduled distance, Kenseth was relegated to a disappointing, 20th-place finish.
The Joe Gibbs Racing driver left Talladega without the Sprint Cup points lead, surrendering the top spot to Jimmie Johnson, who finished 13th. And when it was over, Kenseth expressed exasperation that so few drivers seemed interested in racing for the win.
“I should have been smarter and rode like everybody else did,” said Kenseth afterward. “(I should have stayed) half-throttle on the top and finished there, but I thought we’d get enough cars to mix it up, make a run back toward the front and mix it up for the win. I thought that’s what we’re here to do.” 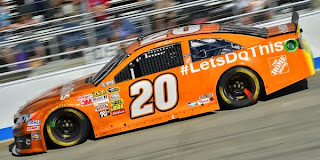 Ironically, Johnson was victimized by a similar late-race strategy, salvaging a 13th-place finish only after wedging himself back into the high line when his own late-race charge stalled out.
“I had to jump up there and salvage what I could,” said Johnson. “I was really shocked. I don’t know why guys didn’t try to do it, (because) we were able to make the bottom lane work before. I was near the end (of the pack) and nobody would go. I guess everybody just wanted to finish.
“It’s no fun when (the field) does that. It’s the nature of plate racing. You don’t know the place to be.’’

Joey Logano, one of the few drivers to throw-in with Kenseth’s late move, also expressed surprise that so many of his colleagues elected to stand pat in the high lane.
“That was a lot more conservative race than anyone ever thought,’’ said Logano. “We all were racing pretty hard, but in the end, nobody wanted to go.”
“I’m dumbfounded why everybody rode,” said a stunned Kenseth after the race. “I should have thought about points more. It was a horrible, horrible day for us.”

Now, the Sprint Cup spotlight shifts to Martinsville Speedway, where Kenseth is winless in 27 career starts and Johnson is an eight-time winner. “I don’t think it will affect my team,’’ insisted the Joe Gibbs Racing driver. “I feel like we can go everywhere else and race with anybody when we’re at our best. Hopefully, we’ll be at our best the next four weeks and give them a run for their money.”
If not, Kenseth may look back at Talladega as the tipping point in this 2013 championship drive, on a day where patience – for once – was definitely not a virtue.