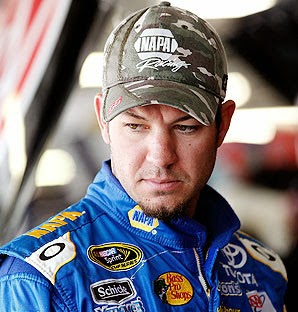 Martin Truex, Jr. has confirmed that he will not return to Michael Waltrip Racing in 2014.


Truex’s current sponsor, NAPA Auto Parts, announced recently that it will end its relationship with MWR at season’s end, unhappy with the situation at Richmond International Raceway last month that resulted in Truex being removed from the 2013 Chase for the NASCAR Sprint Cup.
“I gave (Michael Waltrip) time to try and work it out and we tried to work it out together,” said Truex yesterday on Sirius XM NASCAR Radio's Sirius XM Speedway. “But it’s hard to put stuff together at this point of the year. So it’s time now for me to figure out what I’m going to do, and figure it out quickly. I’m running out of time.”
Waltrip confirmed Truex's impending departure, saying, "I just love Martin's heart. Not inly is he extremely talented and focused, but he's also extremely popular in the garage area, and among the fans. I know Martin and I know (crew chief) Chad Johnston, and they're all about winning these last five races. I know they will land somewhere (next season), very well."
Asked about speculation that he is the heir-apparent to Kurt Busch at Furniture Row Racing next season, Truex insisted, “there is nothing to talk about yet. They’ve done a great job this year and I’m interested in their program. They’re definitely on my radar, but we’ll just have to see where it goes.”
Truex said he would like to replicate the atmosphere he enjoyed during his tenure at MWR, saying, “It makes a huge difference. There is no better feeling than when you’re part of a team that believes in you. At the Sprint Cup level, everyone has to be pulling in the same direction. Everyone has to be on the same page. They have to believe in each other through the good times and the bad. That’s what competitive teams do, and that’s what I’m looking for.
“I have really enjoyed my years at Michael Waltrip Racing,” he said. “We had a great program, with so many great people working there. Everybody believed in each other and really pushed hard. You didn’t have any backstabbing and people talking behind each other’s back. None of that stuff existed. Dale Earnhardt, Inc. was the same way, and that kind of atmosphere – that kind of loyalty to each other – is what you need to be competitive at this level. I’m looking forward to going somewhere and having that (atmosphere) on my side again.”
“At this point, all options have to be looked at,” said Truex. “I hope I end up somewhere where they want me to drive their race car, and where we can win some races and be competitive.”
Truex said he has not made any inquiries about returning to the NASCAR Nationwide Series garage, where is a two-time champion, but did not rule out doing so in the future.
“I’ve always loved the Nationwide Series and the time I was able to run there – even part-time while running Sprint Cup at DEI and MWR – was a lot of fun. It’s something that I’ve missed in the past few seasons, and I’d be interested in going back there on a part-time basis (in addition to a full-time Sprint Cup ride).”
Truex admitted that the last few weeks have been among the most difficult of his career.
It’s been tough here lately, but we’ll go back after them this weekend,” he said. “All you can do is pick yourself up, dust yourself off and go back and try again. We’ve had a rough go of it lately, but it could always be worse. Hopefully, out of all this bad stuff that has happened, something good will develop.
“What happened at Richmond is over and done,” he said. “We have to move on and make some good things happen. I have put my focus on keeping the faith and staying positive.
“We’ll see what happens.”
Posted by Dave Moody at 11:53 AM