Kurt Busch admittedly has a love/hate relationship with Martinsville Speedway, and a quick look at his track record there proves why.


Last time out in April, Busch’s day  ended with his No. 78 Chevrolet in a ball of fire due to a brake rotor malfunction, en route to a 37th-place finish. 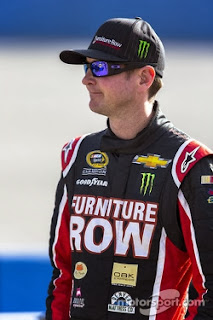 “I love to hate Martinsville,” admitted Busch this week. “It’s been a tough track for me. I’ve won there, but over the years, I also have had my struggles there.”


If there’s a silver lining for Busch, it’s the test session he and the Furniture Row Racing team conducted at Martinsville a few weeks ago.


“We came away feeling pretty good about what we learned,” said the ninth-place driver in the Sprint Cup Series points. “Now, it's a matter of compressing that data and applying it to our race setup in our Furniture Row Chevrolet.”


To have success in Sunday’s Goody’s Headache Relief Shot 500, Busch said mastering the center of the corner and adapting to track changes will play key roles.


“Martinsville comes down to having your car rotate in the center of the corner and being able to drive off the corner underneath somebody,” he said. “As the track changes its rubber build up, you have to be able to roll with the changes. You have to be smart enough to keep track of the changing conditions and not overdrive the car early on."
With a 61-point deficit to championship leader Jimmie Johnson and only four races to erase it, Busch needs to experience the “loving” side of Martinsville Speedway this weekend.
Posted by Dave Moody at 1:51 PM