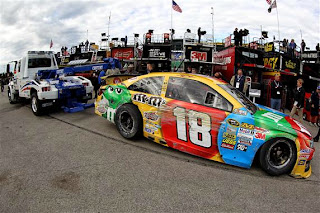 Misery runs in the family at Kansas Speedway.


Brothers Kyle and Kurt Busch both crashed their primary cars in the early laps of today’s opening NASCAR Sprint Cup Series practice, and will be forced to start Sunday’s Hollywood Casino 400 from the rear after resorting to their backup mounts.
Kyle Busch slammed the outside wall in the opening minute of practice, pancaking the side of his Joe Gibbs Racing M&Ms Toyota and forcing the team to roll-out their backup car. Elder brother Kurt lost the handle on his Furniture Row Racing Chevrolet a few laps later in Turn Two, while attempting to avoid the bobbling car of Marcos Ambrose. He made heavy contact with the left-rear of the car, and will also race his backup car for the remainder of the weekend.
The brothers had qualified 18th (Kyle) and 19th (Kurt) for Sunday’s race. Kyle currently ranks third in Sprint Cup Series championship points, 12 behind leader Matt Kenseth. Kurt is ninth, 55 back.
Posted by Dave Moody at 12:18 PM