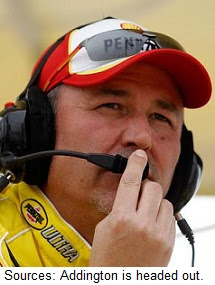 Kurt Busch may soon be interviewing for the third crew chief of his seven-year tenure at Penske Racing. Numerous sources in the NASCAR Sprint Cup Series garage say crew chief Steve Addington will leave the Shell-Pennzoil #22 Dodge at the end of this season, ending an often-combative, two-year run atop Busch’s pit box.

Addington has steadfastly refused to comment on his status with the team, and Penske Racing spokesman Jonathan Gibson told the Charlotte Observer, "We make it a practice to not comment on rumors and speculation.”

The relationship between Busch and Addington has been rocky at times. At Richmond International Raceway in May, Busch complained bitterly about his car’s handling early in the race, saying to Addington: “I can’t fix this. Neither can you. We look like a monkey #$%&ing a football. The #$%&ing Penske (cars) are a #$%&ing joke. #$%& everybody.” He later berated then-Penske Racing Technical Director Tom German in that same race, saying, “Knock yourself out (adjusting the car). According to German he doesn’t like driver input anyway.” 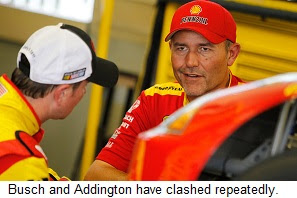 That outburst was credited by some with forcing much-needed changes in technology, philosophy and personnel at Penske Racing; changes that helped spur Busch and teammate Brad Keselowski into the 2011 Chase for the Sprint Cup. Sources within the team, however, say Busch’s frequent diatribes – both over the radio and in person – have put him at odds with his own team. Within a week of Busch’s Richmond rant, German announced that he would leave Penske Racing to attend MIT’s prestigious Sloan School of Management. Now, Addington is reportedly planning his exit, much like predecessor Pat Tryson did at the end of the 2009 campaign.

Busch is hardly the only driver to berate his crew in public during times of stress. But the frequency of Busch's attacks -- and their ferocity -- will apparently cost the 2004 Sprint Cup Series champion the services of a crew chief who many consider to be one of the best in NASCAR.

Addington is expected to finish the season atop the #22 pit box, as the team attempts to climb from sixth place in championship points to win Busch’s second career championship.
Posted by Dave Moody at 2:20 PM