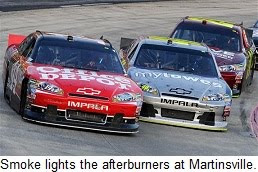 Tony Stewart fired another shot across Carl Edwards’ championship bow Sunday at Martinsville Speedway. Edwards dodged that bullet -- and a number of others – setting the stage for a three-race slugfest for the NASCAR Sprint Cup Series championship.

Just seven weeks after declaring himself a non-threat for the 2011 title, Stewart stormed to his third win of the Chase, driving around five-time champion Jimmie Johnson on a late-race restart to win the TUMS Fast Relief 500. "It was just a matter of keeping him pinned down where I had flexibility to move around on the racetrack," said Stewart, whose surprisingly easy pass for the win left him just eight points behind Edwards in the championship standings. After struggling to finishes of 34th, 24th and 26th in his previous three Martinsville starts, Stewart lit the afterburners Sunday, emerging from a 500-lap, 18-caution flag slugfest that devoured a number of title competitors with a virtually unmarked Chevrolet and his third checkered flag of the season.

"(Edwards) better be worried,” warned the two-time Sprint Cup Series champion afterward. “That's all I've got to say. He isn't going to have an easy three weeks. It's no disrespect to him. He's a great competitor and a great guy. But we've had one of those up-and-down years, and we're (on) run now where we're hungry. We've been nice all year to a lot of guys (and) we're cashing tickets in these next three weeks."

"He's wound up," admitted Edwards, who overcame a horribly handling race car and two lost laps during the day to claim an unlikely ninth-place finish. Edwards called that finish – and his retention of the point lead -- “like a win," insisting that his Aflac Ford is the car to beat for the championship. "Tony’s in Victory Lane, he’s feeling good. He’s going to be tough… (but) they're going to have to beat us."

"I don't care what he says,” replied Stewart. “We're going after him for three weeks." 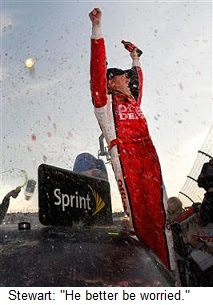 Arguably NASCAR’s best streak shooter, Stewart has momentum, confidence and experience in this kind of all-or-nothing, late-season championship battle. Edwards has the advantage of Roush-Fenway Racing; an operation that historically dominates on mile and 1.5-mile ovals. With Texas (1.5 mile), Phoenix (one mile) and Homestead-Miami (1.5 mile) Speedways still ahead, RFR and Edwards will be playing to their strength. Stewart also has solid records at each of the three remaining tracks, setting the stage for what could be one of the most exciting championship stretch drives in NASCAR history.

Despite what Stewart and Edwards say, this is not yet a two-man dance. Kevin Harvick lurks just 21 points behind Edwards in third place, with Brad Keselowski and Matt Kenseth just 27 and 36 points back, respectively. Don’t tell that to Stewart, though, who ratcheted up the championship intensity by throwing the gauntlet at Edwards’ feet.

"It's awesome we have that opportunity to get three (wins) in the Chase like this," said Stewart. "It's awesome sitting here, knowing we have three tracks coming up that have been good for us. I'm excited. It's a great feeling."
Posted by Dave Moody at 10:28 AM