BREAKING NEWS: Sorenson Out Of Turner #32 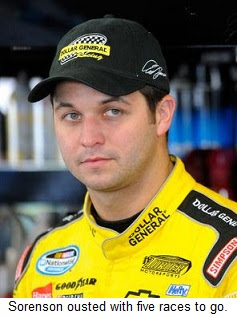 Sirius NASCAR Radio’s Sirius Speedway with Dave Moody has learned that Reed Sorenson is out of the Turner Motorsports #32 NASCAR Nationwide Series Chevrolet, effective immediately. Sorenson is currently third in Nationwide Series championship points with just five races remaining, 49 behind leader Ricky Stenhouse, Jr. He finished seventh last Saturday at Dover International Speedway. Sorenson confirmed his ouster today, saying, “I’m not sure what happened. I got a phone call this morning, but they didn’t really say much. All they would say is that I’m out of the car. I haven’t gotten a reason, I’m just as confused as you are.”

Sorenson said he is currently "beating the bushes" for a Nationwide Series ride that will allow him to complete the 2011 season.

The team’s sponsor, Dollar General, informed Turner Motorsports recently that it will seek other opportunities in 2012, with reliable sources saying they will end up at Joe Gibbs Racing next season as a major and associate sponsor of the team’s various Sprint Cup and Nationwide Series entries.

Multiple calls to Turner Motorsports in search of comment were not returned.
Posted by Dave Moody at 2:59 PM