Lally Out, Sadler In As TRG Shuffles Lineup

Hermie Sadler will drive the #71 TRG Motorsports Ford this weekend at Martinsville Speedway with a new sponsor to be announced tomorrow. Plans originally called for Sadler to steer the #71 machine in his home state Sunday, with TRG’s regular 2011 driver, Andy Lally, wheeling a second, #77 TRG Ford. Lally revealed today via Twitter that those plans have changed, saying, “TRG withdrew the 77… I won’t be racing this weekend.” 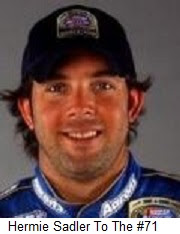 TRG Motorsports owner Kevin Buckler explained the move today, saying a hard crash at Talladega forced him to change his plan for this weekend. “We took ourselves out of the Top 35 in owner points with that crash at Talladega,” said Buckler. “We had planned to run both the 71 and 77 cars at Martinsville, but if we run the 77 now, we’ll be competing against ourselves for one of the “Go Or Go Home” spots. That obviously doesn’t make good business sense, so we will run one car with Hermie Sadler this weekend, and hope to get back into the Top 35 for Texas.”

Buckler said the team will announce a new Martinsville sponsor tomorrow that “really likes Hermie. We really like Hermie too, so we’re going to put him in the car.” Buckler said the driver change is not a sign of unhappiness with Lally, adding the road racing specialist could return as soon as next weekend at Texas Motor Speedway.

“Ideally, the plan is to run well enough this weekend to get back into the Top-35, so we can field two cars at Texas for Andy and TJ Bell,” he said. “If not, it’ll be one car at Texas with a driver to be determined. With just a couple of races left this season, I have to take care of business and do what’s best for the team.”

The #71 TRG Motorsports Ford now trails the #38 Front Row Motorsports Ford by just two points in the battle for 35th place in owner points. The top 35 teams in this year's final standings will earn guaranteed starting spots in the first five races of next season.
Posted by Dave Moody at 1:40 PM