Bowyer Confirmed To MWR Next Season 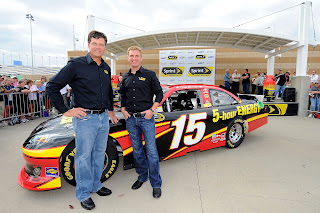 Michael Waltrip Racing made it official today, announcing that Clint Bowyer will drive the team's #15 Toyota with 5-hour Energy as primary sponsor for the next three NASCAR Sprint Cup seasons.

The announcement ends months of speculation about where NASCAR's most prominent unsigned free agent might land. "This has been a very long summer, but I think for everyone involved, the best decision was to be at Michael Waltrip Racing," said Bowyer. "I am a big fan of 5-hour Energy, so I was really happy when they approached me about putting a deal together. We were diligent in working through our options and finally found the right fit."

The 32-year old Bowyer is a six-year veteran of the NASCAR Sprint Cup Series, with four career victories, two pole positions, 30 career Top-5 and 90 Top-10 finishes. MWR is finishing its fifth season in the Sprint Cup Series, and has scored two wins. He said he has been impressed with Michael Waltrip Racing and its ongoing efforts to elevate itself to the ranks of NASCAR's elite teams. "Then, when the 5-hour Energy met with Michael and his people, we knew this was going to be our home," he said. "I've been with one organization for my entire Sprint Cup career and leaving there was the hardest part of the decision. But now I'm ready to start the next chapter in my racing career."

Michael Waltrip, who co-owns the team along with partner Ron Kauffman, called the signing, "a watershed moment for our young organization. Clint is a proven winner and consistent Chase participant. He had a lot of options and it makes me proud that Clint and 5-hour Energy chose to race with us. "This announcement continues to show Toyota, our sponsors, our employees and the entire NASCAR community that MWR is serious about success and dedicated to winning."

Bowyer unveiled the new #15 Toyota in front of his home state fans at Kansas Speedway, and said, "Michael Waltrip Racing is a growing team that is hiring a lot of the right people and on the brink of breaking out. I know I'm joining it at the right time."

Waltrip said there is room for another, 12-race sponsor on Bowyer's #15 Toyota, and pledged to keep working to fill that void in time for the 2012 season-opener at Daytona International Speedway. He said a crewchief for the team will be announced in the near future.
Posted by Dave Moody at 4:30 PM