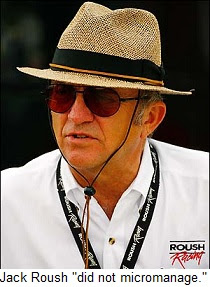 Jack Roush says there were no “team orders” issued to driver Trevor Bayne or anyone else in Sunday’s race at Talladega Superspeedway. A controversy arose late in Sunday’s race when Bayne initially agreed to draft with Chevrolet driver Jeff Gordon on the final restart, then abandoned the four-time Sprint Cup Series champion in favor of fellow Ford pilot Matt Kenseth. Gordon finished 27th, and said of Bayne afterward, “If somebody is going to screw you, you'd like them to say it to your face."

Bayne, meanwhile, said he felt “strong armed” by Roush and Ford Motor Company, saying he would rather sit out of next year’s superspeedway races than be subjected to such a situation again.

Roush issued a statement Tuesday saying, "At Roush Fenway Racing, we expect our individual drivers to make decisions that put themselves in the best position to win each and every race. That is a philosophy that we have lived by for over two decades, and one that we will continue to abide by going forward. Of course, as in any team, we would prefer for our drivers to work together when possible. However, to be clear, we did not micromanage or dictate to any of our drivers, nor any other Ford drivers, how to race… at Talladega last Sunday.” 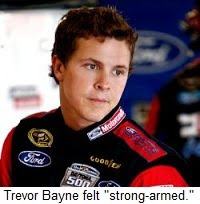 Roush said, “There are unique codes that all drivers… have to live by on the track. How they manage their code is up to our drivers as individuals. There were no team orders -- from myself or anyone at Roush Fenway -- given to any of our drivers as to whom they could or could not run with or assist. I've spoken with Trevor and understand that he was put in a situation requiring a split-second decision on the track. Trevor is extremely talented, but it is still very early in his career. Over time he will grow to understand that in such a high-paced, competitive and hostile environment, it is unlikely that all of his decisions will make everyone happy. I'm confident in his decision making, his ability and actions on the track, and I'm excited as we continue to move forward with his development."

Allison said, “We discuss many strategies… (but) we don't mandate. We don't issue orders.” Allison said he personally spoke to each Ford team at the start of the Chase, saying, “If an opportunity presents itself where you can help a Ford teammate, please be aware and try to help out.” He called his request, “an outreach, a consideration… no orders,” saying, “We are just reaching out and helping fellow teammates.''
Posted by Dave Moody at 2:29 PM