If Ron Hornaday, Jr., was interested in resting on his laurels, Saturday night's victory at Kentucky Speedway would serve as a mighty fine resting place.

For the record, he is not. 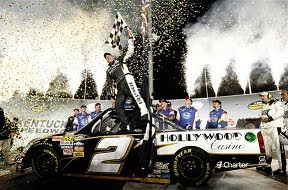 Hornaday claimed the 50th win of his NASCAR Camping World Truck Series career Saturday night at Kentucky Speedway, holding off the determined advances of point leader Austin Dillon to lead the final 10 laps of the race and win by nearly half a second. That 50th victory puts Hornaday a country mile ahead of his closest pursuer on the all-time list, Kyle Busch, who has 30 career checkered flags. It also reinforces his status -- if any further proof was needed -- as the greatest driver ever to strap into a race vehicle equipped with a tailgate.

The 53-year old Palmdale, Calif., veteran has parlayed a combination of speed and longevity into a Truck Series resume that is second to none. Of the 33 men who took the green flag in the inaugural NASCAR SuperTruck Series race at Phoenix International Raceway in February of 1995, only Hornaday still races trucks on a full-time basis. He sat on the pole for that inaugural event, won in the circuit's second start at Tucson Raceway Park two months later and claimed the series championship in 1996, when Austin Dillon was just five years old.

"This will mean a lot when I sit on the front porch in the rocking chair with my grandkids and tell `em I won 50 races," said Hornaday in Victory Lane Saturday. "Austin is an up-and-coming star, and at age 53, I beat him."

"I gave it everything I had on those last laps," said Dillon afterward, "(but) the old man whipped my tail."

Now, all Hornaday wants is an opportunity to do it again.

His Kevin Harvick, Inc., team will disband at the end of the 2011 season, leaving Hornaday effectively unemployed. That's an uncomfortable position for a 53-year old professional athlete to be in, and with a flagging economy making sponsorship increasingly difficult to come by, Hornaday knows the odds are not necessarily in his favor. Eddie Sharp Racing is set to expand to three Trucks next season, and there are rumors of a second Chevrolet from the Joe Denette Motorsports stable. Rumors won't pay the mortgage, though, and they surely won't put Hornaday in the starting field at Daytona next February.

At least not yet.

"Car owners know I don't have $3 million, so my phone's not ringing," said the four-time Camping World Truck king. "Maybe after all the kids with money get sorted out, I'll be able to find something for next year." 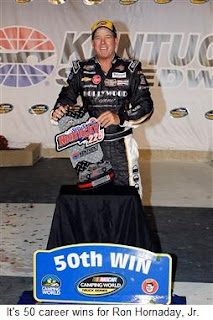 All it will take is one team owner who understands the way to Victory Lane does not necessarily include someone with perfectly coiffed hair, a rich daddy and a crash clause. Just one team owner who wants to make his trucks faster than they've ever been before. A team owner who's as interested in winning championships today as he is in building for the future.

"Ron has been the heart and soul of the Truck Series," said Harvick, whose potent Chevrolets have carried Hornaday to 24 of his 50 NCWTS victories. "Fifty wins is just one more incredible achievement in a career that I'm sure will one day land him in the NASCAR Hall of Fame."

Let's hope that day is still a few years away.
Posted by Dave Moody at 6:30 PM