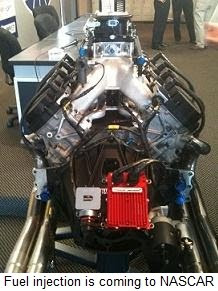 NASCAR, Freescale/McLaren and Roush Yates Racing Engines took the NASCAR media to Electronic Fuel Injector school Monday, updating reporters on the status of the sport’s new fuel injected powerplant that will debut in the NASCAR Sprint Cup Series at next year’s Daytona 500. As teams tested the new. fuel-injected powerplants on track at Charlotte Motor Speedway, Steve Nelson, Director of Marketing for Freescale Semiconductor joined Roush Yates Engines’ Doug Yates and NASCAR Sprint Cup Series Director John Darby to outline what EFI is, and what it is not.

Freescale’s Nelson revealed that the system used in NASCAR competition is largely the same as those used in passenger cars. “When we build components for the automotive industry, the requirements are incredibly stringent,” he said. “Consumers demand that they be reliable, fuel efficient and safe. The electronics that go into the new NASCAR ECU (electronic control unit) are the same electronics that are running in your passenger car. We’re excited about helping to put the `stock’ back into stock cars.”

“This is very important to the auto manufacturers,” said Yates. “Ford Motor Company’s decision to spend money in this sport has been re-energized by the decision to convert to EFI. These are some of the most modern, highly refined pushrod engines in the world. We are stepping to the forefront of technology. This is the best of both worlds.”

Yates said NASCAR’s new throttle body fuel injection system is based on one electronically controlled injector for each cylinder. He called the system “highly reliable,” noting that Freescale/McLaren has never experienced a system failure in any series they have competed in. The traditional, V8 engine sound will not change with the advent of fuel injection, and teams will benefit from Increased diagnostic capability. “Teams can now download data between practices and see what’s really going on,” said Yates. “In the past, I driver could say, `I missed a shift, but it wasn’t too bad.’ Now the team can look at the data and tell exactly how hard the engine turned, and how much damage may have been done. NASCAR can also plug into the system and police the data to ensure everyone is on the same playing field.”

The main advantage to EFI will be in at-track tuning. Laptop computers will replace carburetor adjustments and timing changes, with teams able to adjust their engines right up to the start of the race. No telemetry will be allowed once the race begins. Yates said that in the future, fans could even access data during the race. “A fan at Kansas Speedway two weeks ago could have watched Jeff Gordon’s oil temperature climb until his engine finally blew,” he said, adding that such technology is still a few years away. 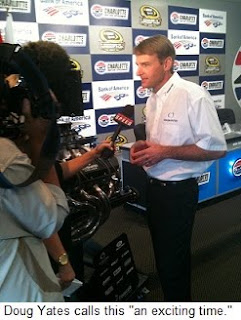 Yates addressed the cost factor of converting to EFI, saying, “There is definitely more up-front cost for the teams, since it’s a whole new hardware system. But we’re working hard with the teams and car owners to make sure this comes out on the good end.” NASCAR’s Darby said the sanctioning body is also conscious of cost, adding, “We’re working to be as frugal as we can for the team owners. I’m not going to tell you this is cheap, because it’s not. But over time, it will all come back to the teams.”

Both Yates and Darby were quick to downplay concerns that the advent of EFI could open the door to illicit, computer-based traction control devices. “There are no sensors in this system to measure traction or wheel speed,” assured Yates, “and NASCAR has limited the amount of adjustment in the system to prevent any possible use of traction control.”

Darby said, ”One of the major reasons we partnered with McLaren was the security built into their system to prevent the introduction of traction control. NASCAR will have the capability to watch every lap, just like the teams can. There are a tremendous number of fire walls built into this system to prevent teams from making any unauthorized modifications or changes. We’re using the same technology that produced traction control to defend against it.”

The Sprint Cup Series Director said ultimately, EFI may allow teams to run multiple races with the same engine, without the expense of a rebuild. “Increased access to engine data will allow engine builders to push the limit further,” he said. “Ultimately, the goal is to get Sprint Cup engine builders comfortable with the idea of running an engine for more than one race between rebuilds.” He admitted that goal is also still at least two years down the road.

“This is an exciting time for engine builders,” said Yates. “A carburetor has just four adjustments. It is what it is. With EFI, an engine builder can adjust every cylinder separately.” He said there is still some question about how the new system will work in the draft at Daytona or Talladega. “We’re interested to see what happens (in an EFI test) next week at Talladega,” said Yates. “We need to see whether the system will update fast enough to account for changes that occur in and out of the draft. The test next week will tell a lot.”

It is expected that restrictor plates will still be part of the EFI superspeedway package. However, the plate will now regulate the flow of air only, rather than the air/fuel mixture delivered by the current carburetor-based system. .
Posted by Dave Moody at 12:46 PM