Sorenson Finds A Ride For Kansas

Reed Sorenson will race this weekend at Kansas Speedway, after all. 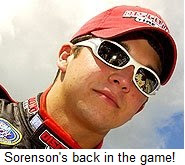 Just days after being released by Turner Motorsports, the number-three man in NAASCAR Nationwide Series championship points has inked an agreement to drive the #82 MacDonald Motorsports/K-LOVE Dodge tomorrow afternoon in Kansas.

Sorenson stands just 49 points behind leader Ricky Stenhouse Jr, in the Nationwide Series championship standings, with just five races remaining. K-LOVE is a listener-supported national radio network that airs on more than 400 stations across the country, serving more than 5 million listeners each week.

There is no immediate word on whether Sorenson will remain in the car for the remainder of the season. He will also drive Robby Gordon's #7 Sprint Cup Series Dodge Sunday in Kansas, making his second consecutive start in that machine.
Posted by Dave Moody at 2:31 PM