Notes From A Busy Thursday In Charlotte 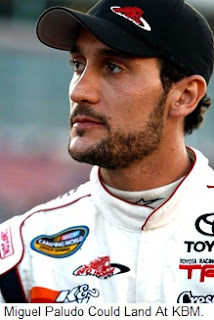 Sirius-Speedway.com has learned that Miguel Paludo is negotiating to take his Stemco/Duraline sponsorship to the Kyle Busch Motorsports NASCAR Camping World Truck Series team next season. The Brazilian driver ran four races for Red Horse Racing late in the 2010 season, and has run the entire Truck Series schedule for the team this year with three Top-5 and six Top-10 finishes in 20 starts. He is currently 15th in championship points, with a top finish of third in the “VFW 200” at Michigan International Speedway in late August.

Kyle Busch Motorsports General Manager Rick Ren confirmed that talks have taken place with Paludo, but said no deal has been reached. “We’ve had conversations with Miguel, but we’ve also had conversations with quite a few other people,” said Ren. “It’s kind of early to say that anything is going to happen. We make the best offer we can, then sit back and see what (the driver) wants to do.” Ren said KBM has spoken to as many as three different drivers about joining the team in 2012, stressing that such talks are normal for this time of year. “We talking to three guys, but those three guys are also talking to other teams,” he said. “We’ll see how it all works out.”

The discount retailer is expected to announce this weekend at Charlotte Motor Speedway that it will sponsor Logano in up to a dozen races next season, with Home Depot backing the remainder of the 36-race schedule. Dollar General will also serve as major sponsor of JGR’s #11 Nationwide Series Toyota, driven by Brian Scott. The company has previously backed Reed Sorenson’s #32 Turner Motorsports Nationwide Series entry, as well as Kyle Busch’s #18 Camping World Truck Series Toyota. 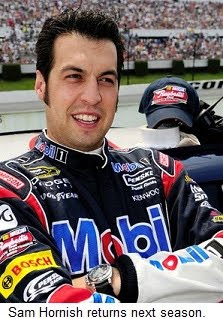 Team owner Roger Penske confirmed this week that he is close to a multi-year deal that will secure sponsorship for both the team’s 2012 Nationwide entries. While not naming Alliance by name, Penske said, “I feel really good about fielding two cars next year."

Schedule News: NASCAR is expected to release its 2012 Nationwide and Camping World Truck Series schedules next week; each featuring fewer events than in 2011. The Nationwide slate is expected to include 33 events next season -– down from 34 this year -– and include a return to the Circuit Gilles Villeneuve in Montreal. That event was thought to be in jeopardy after local politicos nixed a financial support package for the race earlier this year and International Speedway Corporation withdrew as promoters of the event. However, a new promotional team has been lined up, and NASCAR racing will continue on the Isle Notre Dame circuit in 2012.

The Truck calendar is expected to shrink from 25 races to 24 next year, with a pair of road course events added at Road America and Watkins Glen International.

Cobb Still Scrambling: Jennifer Jo Cobb will attempt to qualify her #10 Camping World Truck Series Ford for Saturday’s “Smith's 350” at Las Vegas Motor Speedway. Cobb failed to qualify for last weekend’s Nationwide Series race at Kansas Speedway, the latest in a series of DNQs that pushed her underfunded team to the brink of closing its doors. Las Vegas attorney Glen Lerner rode to the rescue early this week, agreeing to sponsor Cobb this weekend in his hometown, a decision Cobb called, “a boost for our team,” adding, “It is an honor to represent Glen Lerner and his elite team of attorneys.”
Posted by Dave Moody at 2:25 PM