With Six Races To Go, It's An Eight-Man Chase

The most schizophrenic championship chase in the history of NASCAR took on its latest persona Sunday, as five-time and defending Sprint Cup Series champion Jimmie Johnson claimed a dominant victory at Kansas Speedway that pushed him back into title contention. 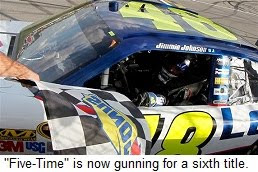 Johnson shrugged off a series of late restart challenges from Kasey Kahne, Brad Keselowski and others to win just his second race of 2011 on a day when others struggled with the slick, bumpy Kansas tri-oval. Johnson was dominant from the start, gaining valuable track position when crew chief Chad Knaus opted to change only two tires during the race’s first caution on lap 21. Once in front, the Lowe’s Chevrolet was rarely headed, often leading by wide margins.

At one point, Knaus responded to Johnson’s complaints about an ill-handling race car, saying, “Jimmie, you’re turning the fastest laps of anyone on the track, and you’ve got a 7.5-second lead.” He took the lead for the final time with 27 laps remaining, surging past eventual third-place finisher Brad Keselowski and driving off into the Kansas sunset on a green/white/checkered flag finish made necessary when teammate Jeff Gordon blew an engine within sight of the checkered flag.

The victory was Johnson’s 55th career Sprint Cup triumph, and moved him into a tie with Rusty Wallace for ninth on the all-time win list. More important, it allowed him to erase the deficit he faced after a pair of mediocre finishes at Chicagoland and New Hampshire. Once tenth in the championship standings, “Five Time” now lurks just four points from a possible sixth consecutive Sprint Cup title with six races remaining.

"Jimmie was the car to beat all day," admitted Keselowski, who used a deft bit of pit strategy by crew chief Paul Wolfe to claim yet another impressive Chase finish. Languishing near the tail of the Top-10 in the late going, Wolfe left Keselowski on the track while everyone in front of him pitted. “Bad Brad” did the rest, manhandling his Miller Mite Dodge to a third-place finish behind Johnson and Kahne. "It all comes back to having a good team," said Keselowski, now fourth in the title Chase, 11 points back. "Good teams have good cars, they're fastest at the end, they have good pit strategy and they're strong through adversity. I just have a really good team." 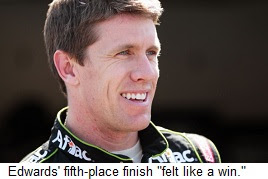 The day’s best comeback belonged to Edwards, who lost a lap to a horribly tight race car in the race’s middle stages. His Bob Osborne-led team made massive chassis adjustments – including a packer in the left-front spring – en route to an epic comeback that carried him all the way to fifth place at the drop of the checkered flag. “This feels like a win,” said a beaming Edwards afterward. “To be as far down as we were and fight our way back, it feels pretty good.” He refused to celebrate his newfound spot at the top of the championship standings, however, saying, “'There's a lot that can happen in the next six races. There are so many moments that will still define this championship.''

Kevin Harvick left Kansas a single point behind Edwards, after his latest consistent – if not spectacular – performance. His Budweiser Chevrolet was never a threat to win, but lurked in the Top-10 all day before eventually finishing sixth. Harvick is still looking for his first Chase victory of 2011, but an average finish of 7.5 in the last four weeks will keep him solidly in championship contention heading to Charlotte. 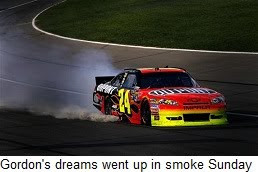 Tony Stewart squandered a fast race car – and whatever remained of his early Chase momentum – with a series of late-race miscues that relegated his Office Depot/Mobil 1 Chevrolet to a disappointing, 15th place finish. After sweeping the first two Chase races at Chicagoland and New Hampshire, Stewart surged forward from his 23rd starting spot Sunday, cracking the Top 10 within 40 laps and running among the leaders all day. It all fell apart late, when he overshot his pit on the final stop. By the time his crew pushed him back and completed their service, Stewart had plummeted to 17th place. He gained only two positions on the ensuing green/white/checkered flag restart, and now heads for Charlotte Motor Speedway seventh in points, 20 behind Edwards.

With Kansas now in the rear view mirror, it now appears to be an eight-man championship chase. Ninth-place Dale Earnhardt, Jr., now lags 43 points behind; one full race with just six events remaining. With a winless streak now spanning more than three calendar years, the AMP Energy/National Guard team does not appear capable of such a comeback. Jeff Gordon plummets to 10th, 47 points behind after an unfathomable engine failure Sunday. He’ll need to win three of the next six races to resurrect his championship hopes, and that’s a lot of ask, even from a four-time series champion. Ryan Newman (54 points out) and Denny Hamlin (79 back) are merely along for the ride.
Posted by Dave Moody at 11:42 AM