With four races remaining in the 2011 Chase for the NASCAR Sprint Cup, Roush Fenway Racing appears to be closing in on its third Sprint Cup Series title. RFR teammates Carl Edwards and Matt Kenseth hold the top two positions in championship points, with Edwards leading his RFR counterpart by 14 markers.

Sunday afternoon’s “TUMS Fast Relief 500” at Martinsville could change all that in a heartbeat. 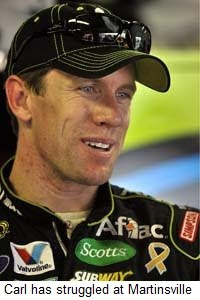 While dominating NASCAR’s intermediate tracks, Roush Fenway Racing has struggled mightily on the bullrings this season. Both Edwards and Kenseth have long records of personal disappointment at the half-mile Virginia oval as well; a trend that will have to change if either man hopes to remain at the top of the 2011 championship standings.

In 14 career Martinsville starts, Edwards has just one Top-5 finish; a third-place effort back in 2008. The tight confines of the historic Virginia oval have not been kind to the Aflac Ford driver in the past, relegating him to an average finish of 16.9. After finishing a dismal 18th there in June, the Missouri native will almost certainly be happy to put the final short-track race of the season in his rear view mirror, once and for all. 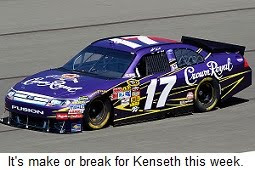 While Edwards has struggled mightily at Martinsville, Kenseth’s numbers are even worse. He has only two Top-5 finishes in 23 career starts there, with a best-ever showing of second in August 2008. With finishes of 23rd, 14th, 18th, 15th and 6th in his last five Martinsville races, Kenseth also faces a “make or break” weekend in the Commonwealth of Virginia.

Third-place championship contender Brad Keselowski has been lukewarm in his limited Martinsville Sprint Cup starts, finishing 12th, 10th and 19th in his three career races there. The Michigan native has been on a major role of late, and if Edwards and Kenseth struggle this weekend, another solid run by Keselowski could push him to the championship lead. 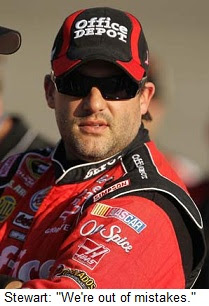 Fourth-place points man Tony Stewart has two career wins on the tight Martinsville half mile, the most recent coming back in 2006. He also has a pair of poles and Top-10 finishes in 13 of his 25 career starts there. In recent years, though, “Smoke” and his Mobil 1/Office Depot Chevrolet team have lost their Martinsville fire. Stewart has struggled to finishes of 26th, 24th and 34th in his last three starts, while teammate Ryan Newman has been 30th and 20th in his previous two outings. “We’re out of mistakes,” said Stewart last week at Talladega. “One more bad race and we can kiss the championship goodbye.” 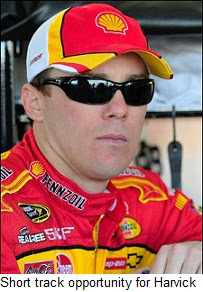 Currently fifth in points – 26 behind Edwards – the same can likely be said for Kevin Harvick. With an average finish of 16.5 in his 20 career Martinsville starts, this does not look like the week for him to jump back into title contention The Budweiser Chevrolet team’s short track program has recently shown signs of improvement, though, claiming the pole at Martinsville last spring and winning there last time out. A repeat performance Sunday will almost certainly resurrect Harvick’s title hopes.

There’s still a long way to go before NASCAR crowns its 2011 champion at Homestead-Miami Speedway on Nov. 20. But what happens Sunday in the tiny town of Martinsville, Virginia, may go a long way toward determining who hoists that championship trophy.
Posted by Dave Moody at 2:18 PM