Dignitaries Named For "Better Half Dash" 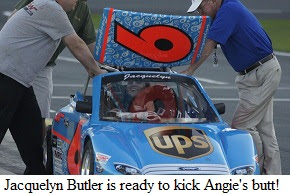 “Being the Grand Marshal is something that I’m really excited to be a part of,” said Sadler, who is the Executive Director of Speedway Children’s Charities. “I think this is way above and beyond anything I’ve ever done before, and I’m honored to do it. It’s going to be a delight.”

Earnhardt, who is currently pregnant with her third child, will wave the green flag to start the Better Half Dash; something that she is looking forward to since she isn’t able to compete. “Obviously as a former race car driver, I would love to be participating with the other ladies in this event,” said Earnhardt, co-owner and general manager of JR Motorsports. “But with a baby on the way, I am thankful they found a home for me as the honorary starter to be a part of the fun.

“It is fulfilling to be doing something positive while raising awareness and funds for Motor Racing Outreach (MRO) and Speedway Children’s Charities. MRO is a staple to our sport and NASCAR family and SCC has done so much for our community.”

The Better Half Dash, which will take place prior to the start of the Bank of America 500, is a charity race supporting SCC and MRO. The race will pit the women of NASCAR against each other as they battle on the frontstretch quarter-mile oval.

The race will start at approximately 2:30 p.m. and will be 25 laps in length, with a competition caution set for Lap 15. There will be two chances at a green-white-checkered finish. Starting order will be determined by random draw prior to the race. The women will race in equally prepared Bandolero cars provided by U.S. Legend Cars International.

The purse for the Better Half Dash will be paid to the driver's charity of choice, with $5,000 going to the winner's charity, $3,000 for the second-place finisher and $2,000 for third. Fans will also have the opportunity to donate $10 to MRO and SCC through the completion of the Bank of America 500 by texting "MOTOR" to 20222.

For more information on the Better Half Dash or to make a donation, visit the MRO website at www.motorracingoutreach.com.
Posted by Dave Moody at 6:43 PM