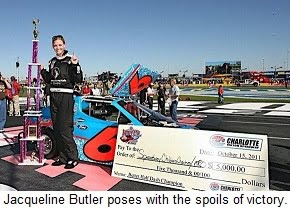 Concord, NC -- Jacquelyn Butler has spent five years watching boyfriend Ragan compete on the NASCAR Sprint Cup Series, so it should come as no surprise that she was the class of the field Saturday afternoon at Charlotte Motor Speedway, claiming the inaugural “Better Half Dash” championship.

“That was crazy,” said Butler in the midst of a frontstretch victory celebration that included a trophy presentation, interviews and a champagne shower. “That was fun. I’m ready to go out and do it again next week.”

Allgaier, wife of NASCAR Nationwide Series driver Justin Allgaier, started inside the second row and took the lead at the start. She led 17 laps of the 25 laps, but slipped back after late caution flag, eventually finishing third. “I know, rub it in,” she said. “While I was out front, I was just thinking, ‘Hit my marks, hit my marks.’ After that caution… every time I’d drive down in the corner, it would start to spin out or (go) straight to the wall. So I’m going to blame it on the tires getting too hot.” 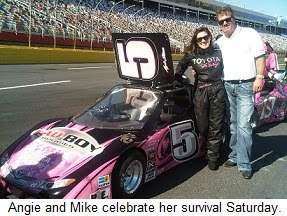 Butler slipped under Allgaier coming off Turn Two with eight laps to go, then pulled away o the win. “She had a lot of pressure on her,” said Ragan of his victorious girlfriend. “She’s been coming out to the Summer Shootout a long time (and) I guess all those days watching me race paid off.”

“All of the girls did really good,” said Butler afterward. “It was fun out there. I want to go back and do it again next week.” The race was slowed by five cautions in the first four laps, before the field found a rhythm and strung together a long green-flag period.