Vegas Slugfest Puts Hornaday Back In The Hunt

Three drivers with the best opportunity to win the 2011 NASCAR Camping World Truck Series championship didn’t seem to want it Saturday at Las Vegas Motor Speedway. And as a result, there are now no less than five title contenders. 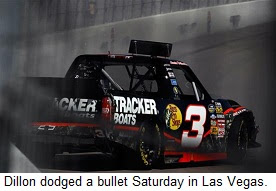 Coming into Saturday’s “Smith’s 350” at LVMS, the Truck Series championship battle appeared to be a three-man affair. Third-generation driver Austin Dillon led the standings by just three points over his equally youthful main pursuer, James Buescher, with Johnny Sauter just 19 points back. But a bare-knuckler of a day on the 1.5-mile LVMS oval -- 10 caution flags for a total 44 laps, including a red flag thrown for an early, multi-truck melee -– turned that comparatively tidy, three-man tussle into a full-scale Battle Royal.

Dillon wrecked on lap two Saturday, graciously handing the championship lead to Buescher while his Bass Pro Shops crew spent 15 laps in the garage making repairs. Buescher botched his golden opportunity, however, getting swept-up in teammate Blake Feese’s spin just a few laps later and finishing 21st after spending considerable time of his own behind the wall. Sauter overcame a couple of bumps along the way to finish fourth, behind winner Ron Hornaday, Jr., Matt Crafton and Timothy Peters.

It was Hornaday who made the day’s most positive move, putting Crafton at arm’s length on a restart with eight laps remaining to claim a record 51st career Camping World Truck Series win. The 53-year young, four-time champion led 107 of 146 laps Saturday to earn his first trip to Sin City Victory Lane. All but written off a month ago, the resurgent Hornaday erased half of his 42-point pre-Vegas deficit Saturday, and with two victories in the last two races, he now lurks just 21 points behind Dillon with four races remaining. 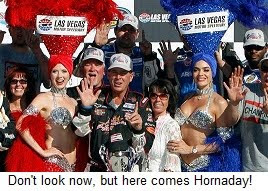 Until recently, the 2011 season has featured a changing of the guard in the Camping World Truck Series as a veritable Kiddie Corps of young drivers -- Dillon, Buescher, Sauter, Cole Whitt, Joey Coulter and Parker Kligerman, to name just a few –- shoved Hornaday and his fellow Truck Series graybeards into the shadows.

Now, it appears that at least one series veteran may simply have been biding his time.
Posted by Dave Moody at 10:01 PM