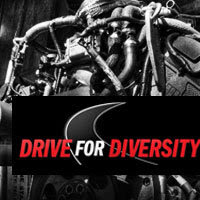 Featuring 26 drivers competing for spots on the 2012 Revolution Racing team as part of Drive for Diversity, the Combine is one of NASCAR’s most successful initiatives. Drivers of diverse backgrounds ranging from ages 16 to 24 representing 10 U.S. states, Mexico and Puerto Rico, took part in media training Wednesday as they waited out the rain.

Sergio Pena is making his third trip to the Combine. The 18-year-old from Winchester, Va., picked up three wins for Revolution Racing in the NASCAR K&N Pro Series East this past season.

“I can't thank Revolution Racing, the Drive for Diversity program and NASCAR enough. They've given me such a great opportunity,” Pena said. “Hopefully we can set some fast times tomorrow. There’s going to be some tough competition out here, so it’s going to be hard to make the team. We’ve got some super fast drivers that are going to be looking to impress everyone.”

That list includes drivers like 17-year-old Amber Colvin, from Tallahassee, Fla. She will be making her first appearance at the Drive for Diversity Combine after making the transition from a successful run in Legends cars to Late Models at the end of last year. “It's so much easier and so much more fun for me,” Colvin said. “It's a very big weight and size difference – you just have to get used to the size of the Late Model. … I’m really excited to be out here at Langley. It looks like a really cool place and I’m looking forward to show how fast I can go on a track I’ve never been to.”

Drivers attending the Drive for Diversity Combine will be evaluated by a select committee on multiple fronts including on-track performance, marketing and media aptitude, physical fitness and personality.
Posted by Dave Moody at 6:24 PM