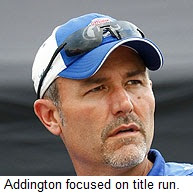 Kurt Busch responded to widespread reports that his crewchief, Steve Addington, will leave the Shell-Pennzoil Dodge team at the end of the season, saying team owner Roger Penske holds an option on Addington’s contract that will keep the veteran crewchief atop the #22 pit box in 2012.

Busch told Sirius XM NASCAR Radio’s Sirius Speedway with Dave Moody, “Roger Penske told me he has a contract option on Addington. It was not even up for discussion back in August, which is the normal contract season.” He accused outside parties of trying to distract the team from its championship run, which currently has him seventh in points, 27 behind leader Carl Edwards. “When you win like we did at Dover, you’re on top,” said Busch. “And immediately, somebody has to try and take you down. That’s when this rumor started, after we were a winning combination at Dover.

“Why would we be splitting up?” asked Busch. “We’ve got five weeks (to go) and we’re in championship contention. (The media) wants to talk about things, and we want to get through the Chase. So why don’t we just wait until the end?”

Addington has called the reports, "pure rumors and speculation."
Posted by Dave Moody at 1:34 PM