Motocross legend James "Bubba" Stewart hopes to follow the tire tracks of colleague Ricky Carmichael, all the way to NASCAR. 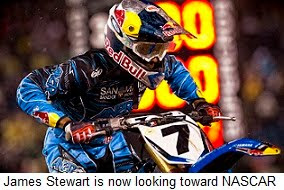 Stewart announced this week that he has signed a multi-year contract to ride for JGRMX; the motocross division of Joe Gibbs Racing. As part of that deal, Stewart will reportedly test a Late Model Stock Car for JGR in the coming weeks, with a limited schedule of Late Model and K&N Pro Series East events possible as early as next season. He will continue his full-time motocross career for at least the next three years, with an eye toward transitioning to stock cars in 2015.

"I am excited about joining the Gibbs racing family," said Stewart. "My goal in Supercross is to pass Jeremy McGrath's record of 72 Supercross wins. I am more than half way there and look forward to realizing that dream during my time with JGR. I have also had an interest in car racing and we are going to explore my potential in that sport through the NASCAR side of the operation." In a related story, JGRMX has extended its relationship with Yamaha Motor Corporation, USA, and will campaign Yamaha motorcycles exclusively through the 2014 season.

Stewart and Carmichael are the only riders ever to finish a season undefeated. Nicknamed “The Tiger Woods of Motocross,” Stewart went a perfect 24-for-24 in 2008 en route to the 2008 AMA Speed Athlete of the Year Award.
Posted by Dave Moody at 2:04 PM