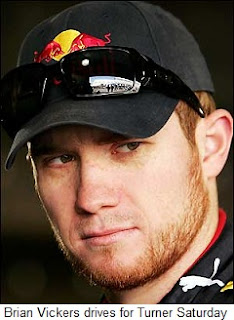 Turner Motorsports has announced that Brian Vickers will assume driving duties of the #32 Dollar General Chevrolet, beginning this weekend at Kansas Speedway. Vickers, the 2003 NASCAR Nationwide Series Champion, who has a long-standing relationship with the team, will also get behind the wheel for the Dollar General 300 Miles of Courage at Charlotte Motor Speedway. The driver for the remaining 2011 races will be announced at a later date.

"We are continuing to evaluate our racing program as we look to the 2012 season," said team owner Steve Turner. "Brian Vickers is a proven winner at NASCAR's highest level in addition to being a driver at Turner Motorsports over the last four seasons. He has worked with (crew chief) Trent Owens in the past, which will allow us to immediately focus on the task at hand. We are confident Brian can help assess where we are, as a company currently, and the direction we are going as we build our programs for 2012 and beyond."

"I can't thank everyone at Dollar General and Turner Motorsports enough for this opportunity," said Vickers. "They have been so supportive of me both personally and professionally over the past few years, and it's great to continue this relationship for a few more races. I am looking forward to driving this new Nationwide Series car with Trent and the guys behind me!"

The #32 team remains under the leadership of Owens, the crew chief Vickers worked with during the majority of his time at Turner Motorsports.
Posted by Dave Moody at 4:27 PM