The Curious Case Of Chad Knaus 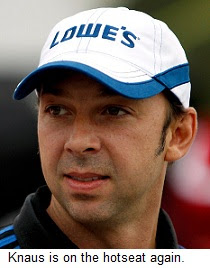 After five years of uninterrupted dominance, the wheels have finally come off Jimmie Johnson’s Lowes Chevrolet. The five-time and defending NASCAR Sprint Cup Series champion is currently seventh in points -- a whopping 50 behind leader Carl Edwards -- and with just four races remaining before the Sprint Cup is awarded at Homestead Miami Speedway, it appears that Johnson’s title run has finally come to an end.

While a 26th-place finish last weekend at Talladega Superspeedway effectively sealed Johnson’s on-track fate, a pre-race conversation with crew chief Chad Knaus has spawned a firestorm of off-track controversy, as well. Moments before the command to fire engines, Knaus leaned into the #48 Chevrolet to engage in what he thought was a private moment with his driver. Unfortunately for Knaus and his Hendrick Motorsports team, a microphone installed in the car for NASCAR.com’s RaceBuddy application captured the conversation, in full.

Knaus' comments have prompted speculation that the #48 team may have been operating outside the rules Sunday. Knaus is an easy target for such speculation, having been caught outside the letter of the NASCAR law at least twice in the past. In 2006, the #48 team made illegal adjustments to their car’s rear window following a Daytona 500 qualifying run, earning Knaus a hefty fine and multi-race suspension. In June of 2007, Johnson was not allowed to qualify at Infineon Raceway, after NASCAR officials discovered issues with his car’s fenders. Johnson was forced to start at the tail of the field, and Knaus was fined $100,000 and suspended for six races. 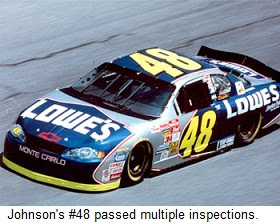 Johnson defended his crew chief in a Monday interview on ESPN’s NASCAR Now, saying, “We're afraid of the tolerances following the race when it's over -– when you win the race and go to inspection. If you have significant damage… from the bumping and the contact, you're fine and NASCAR knows that's happened within the window of racing. (But if) you come back with the car moved around and you're outside of where the tolerances are, you've got an issue. So Chad was just making sure that I was aware of that.”

Johnson correctly stated that his Lowes Chevrolet passed multiple inspections at Talladega, saying, “"That car passed inspection after qualifying, (and had) been through inspection quite a few times. So it's not like we have an issue. NASCAR hasn't come to us and said, 'Your car is illegal.' We've not done anything wrong in that sense.”

Previous guilt does not prove current wrongdoing. But Knaus’ “crack the back” order raises legitimate doubt about the #48 car’s legality Sunday, especially since Johnson drove to Victory Lane with no self-inflicted body modifications following his April 17 victory at the same track. With the exception of minor changes in restrictor plate size and cooling system pressurization, NASCAR’s superspeedway rules did not change between April and October. The sanctioning body’s stringent body tolerances were the same last week as they were in April, and both races were contested with an equal amount of potentially bumper-damaging bump drafting.

With no changes in NASCAR’s rules and regulations, the question must be asked. What was Chad Knaus so afraid of?

The world will likely never know.
Posted by Dave Moody at 10:10 AM