Let us never be fooled again. Auto racing is not now -- and never will be -- safe. 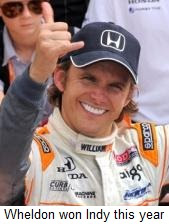 Dan Wheldon’s tragic death on Lap 12 of the IZOD IndyCar Series finale at Las Vegas Motor Speedway confirmed that unassailable fact yet again Sunday, casting a horrible, chest-tightening pall over what should have been a day of triumph and celebration.

IndyCar had not suffered a death since 2006, when Paul Dana lost his life in a practice crash at Homestead-Miami Speedway. NASCAR has been fatality-free since Dale Earnhardt crashed to his death on the final lap of the 2001 Daytona 500. In that time, SAFER barriers, HANS devices, improved helmet and seat technology and car construction have made the sport safer than at any point before. But make no mistake about it, auto racing is not safe, and it never will be.

As long as men and women strap themselves into objects capable of eclipsing 200 miles per hour, horrible things can – and will -- happen. Until the laws of physics are repealed, the immovable force will always trump the unstoppable object. And when it does, racers will die.

Some seek scapegoats at times like this; a convenient someone at whom to direct their anger, heartbreak and remorse. Not long after the announcement of Wheldon’s passing, some pointed an accusatory finger at IndyCar, saying the Brit would not have been in Sunday’s race were it not for the $5 million bonus offered by the sanctioning body for any non-IndyCar regular capable of winning the 2011 season finale. 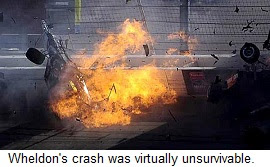 That criticism is both ill-timed and misguided. Dan Wheldon competed Sunday, not because of a $5 million bounty, but because driving race cars was what he loved most. Wheldon lived to race, and he strapped into his #77 Sam Schmidt Motorsports entry this afternoon, knowing -– as every racer does -- what could happen. Just minutes after the green flag was unfurled, tragedy struck in the form of a horrendous, multi-car crash in Las Vegas Motor Speedway’s second turn. Wheldon’s car climbed over another and took flight, impacting the catch fence cockpit-first and exploding in a hideous maelstrom of shrapnel and flame. It was an unsurvivable wreck; one that extinguished one of Open Wheel racing’s brightest lights, and also the illusion that this sport can ever be truly and completely safe.

Less than a month ago, former CBS Sports auto racing commentator Ken Squier chastised NASCAR for fostering the illusion of safety in its particular form of motorsport. "They don't want to talk about risk,” said Squier to ESPN.com’s Ed Hinton, adding that when he was young, “I couldn't understand how anybody could get all wound up watching guys in a baseball park scratching themselves and spitting tobacco. When the guys I admired drove down into the corner, the issue was whether they would come out alive on the other side. This is the one sport where -- if you are committed to it and play it at the highest level -- you take the highest risk. If you're going 200 miles an hour… right on the edge of control, that's a risk."

Squier was correct then, and his words seem even more prophetic today.

“We push ourselves and our teams to win these races and championships,” said Dario Franchitti, who clinched the 2011 IndyCar crown Sunday. “It’s what we live for. We try to block things like this out of our minds, but when I think about Dan right now, I ask myself, `Is this worth it?’ Absolutely not. Dan’s gone.”

“We try not to think about it,” said Tony Kanaan, one of Wheldon’s closest friends in the sport. “But today, we are forced to think about it. He was one of my greatest friends and teammates. I must be getting old. I’ve been through too many of these (situations).”

Sunday’s race was cancelled following the announcement of Wheldon’s death. But before folding their tents and wandering away to the comfort and solace of family, Wheldon’s fellow drivers mustered the strength to re-fire their mounts and circle the track in a five-lap salute to their fallen comrade, as a bagpiper’s mournful rendition of “Amazing Grace” echoed through the speedway.

It was a poignant, tearful testimonial. And sadly, it will not be the last.

Say a prayer for Susie Wheldon tonight; left to raise two-year old Sebastian and seven-month old Oliver without her husband. Say a prayer for the IndyCar family, as well, as they begin the solemn business of convincing themselves all over again that the sport we love is worth the terrible price it often exacts.
Posted by Dave Moody at 8:30 PM