Bellerose To Drive For Godfather Motorsports at Hickory 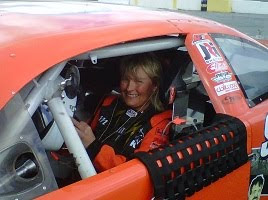 Bellerose tested with the team at the legendary North Carolina oval this week, and impressed Godfather Motorsports co-owner Jim Gallison, Jr. with her smoothness and adaptability. “She has never even seen the race track until we unloaded,” said Gallison, “but with five laps, she was running competitive laps. She found the groove almost immediately, gave me great feedback on the car and really seemed to have a good feel for what she was doing.”

Bellerose turned a fast lap of 15.3 seconds on old tires, just a tenth of a second off the fastest lap of the day, recorded by Hickory’s 2011 track champion on new tires. “The car was comfortable right from the start,” said Bellerose, “and when Jim made a rear spring change, it really came to life. The set-up on this car really suited my driving style, and I can’t wait to get at it for real!”

Bellerose won the the 2000 “Queen of the Road” title at Vermont’s Thunder Road, a track founded and owned by longtime CBS-TV motorsports anchor Ken Squier. That championship is believed to have made her the first woman to win a lead-division title in weekly auto racing. Her resume also includes a 1993 Super Stock Championship at Groveton, New Hampshire’s Riverside Speedway, along with multiple Late Model wins at Oxford Plains (ME) Speedway, White Mountain (NH) Motorsports Park and Thunder Road, as well as on the highly competitive American-Canadian Tour.

Her career was curtailed in a 2003 crash that left her with a badly broken left arm. Months of recovery – including early talk of possible amputation – sidelined the Gorham, NH, native for the better part of three years. But after relocating to Mooresville, NC, recently, she struck a deal with longtime friend (and Godfather Motorsports co-owner) Dave Moody to shake down the #30 Chevrolet a Hickory.

“Once she climbed back through the window of a race car, I suspected it would be just like old times,” said Moody. “We were very pleased with this week’s test; pleased enough to put her in the car for the `Hickory 150.’ I can’t wait to see how it goes.”