The NASCAR community has an important decision to make; a decision that will determine whether stock car racing ever achieves the legitimacy of football, baseball, basketball and hockey. 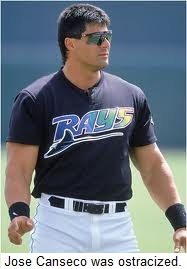 While clearly the leading motorsports sanctioning body in the country, NASCAR still struggles with its image. A quick look at ESPN’s SportsCenter any Monday morning during the season reveals a few brief highlights from the previous weekend’s race, delivered by anchorpersons who periodically struggle to pronounce the names of the sport’s leading athletes. For every 15 seconds of NASCAR, there are 15 minutes of Major League Baseball and NFL coverage; a situation that has improved only slightly in the last decade.

Sadly, the sport does little to help its own cause. In truth, we are often our own worst enemy.

When Mark McGwire, Barry Bonds, Raphael Palmiero and Jose Canseco were revealed to have taken illegal, performance-enhancing drugs, they were ostracized from the game of baseball. Once thought to be first-ballot Hall Of Famers, McGwire and Bonds now sit and wait, receiving only a small percentage of the vote in each year’s balloting. Pete Rose’s decision to bet on baseball cost him a lifetime ban from the sport, and Dwight Gooden’s infatuation with alcohol eventually made him persona non grata with the game, as well.

Baseball, like virtually every other professional sport of note, has little or no tolerance for cheaters. Stock car racing, unfortunately, takes the opposite view.

In our sport, cheaters are not ostracized. They are coddled, justified, even embraced. There’s an old racing adage that claims, “If you’re not cheating, you’re not trying,” and that attitude continues to relegate stock car racing to the ranks of second-string sports.

When Chad Knaus instructed driver Jimmie Johnson to intentionally damage the rear of his car following Sunday’s race at Talladega Superspeedway, it constituted – at very least – a willful intent to conceal the true dimension’s of Johnson’s championship contending Chevrolet. In most sports, such conduct would have been met with immediate disapproval. Among race fans and competitors, however, it was greeted with the kind of “wink and a nudge” attitude that has governed this sport for far too long.

In stock car racing – and only in stock car racing – is willful, out-and-out cheating considered to be an acceptable way to do business. We embrace rule breakers and cheats as heroes, saluting their ability to rob the sport’s bank without ever getting caught. On the rare occasion when a crew chief or driver is found with his hand in the communal cookie jar, he serves a brief, four to six-week suspension, pays a fine and is welcomed back with open arms. This attitude is so firmly entrenched that now, any team that succeeds for any period of time is presumed to be operating outside the rules.

“Everyone does it,” we say. “If you ain’t cheatin’, you ain’t competin’.” That attitude needs to change.

If Albert Pujols’ bat shatters in tonight’s sixth game of the World Series, unloading its corked innards all over the infield at Busch Stadium, he will face the immediate ire of the game, its competitors and fans. In this one area, NASCAR has something to learn from Major League Baseball. 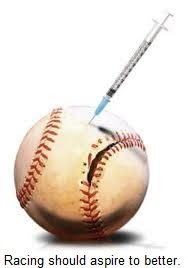 This sport needs a morality lesson; an ethical refresher course in the difference between right and wrong. It’s time to cast off our long-entrenched “cheater’s mentality” and begin supporting those who do things the right way. For far too long, we have embraced those who get ahead by taking short cuts. This debate is bigger than Jimmie Johnson or Chad Knaus. It's bigger than Gary Nelson, Junior Johnson and Smoky Yunick; all reknowned in their day for creative interpretations of the rules.

Only when our collective attitude changes can NASCAR truly take its place among America’s major league sports.
Posted by Dave Moody at 3:20 PM