It’s been a tumultuous season for Trevor Bayne. 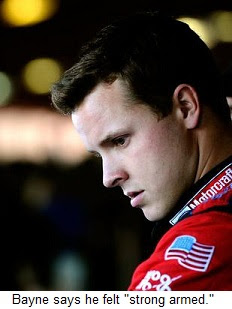 In February, the 20-year old driver authored one of the biggest upsets in NASCAR history, winning the 2011 Daytona 500 for Wood Brothers Racing. Just a few weeks later, Bayne found himself sidelined by a mysterious ailment that sapped his strength, compromised his eyesight and threatened to end his racing career. Sunday, Bayne found himself an unwitting pawn in a bizarre, “team orders” controversy that earned him the ire of four-time series champion Jeff Gordon and Gordon’s highly vocal fan base.

The dispute stemmed from an edict handed down by Ford Motor Company and Roush Fenway Racing majority owner Jack Roush that prohibited Ford drivers from drafting with non-Ford driving championship contenders Sunday at Talladega Superspeedway. After daylong drafting partner Robby Gordon fell by the wayside late in Sunday’s race, Bayne found himself on Jeff Gordon’s front bumper for the final restart. After first pledging to work with his childhood hero down the stretch, Bayne then abandoned the Hendrick Motorsports driver in favor of fellow Ford pilot Matt Kenseth; a move that relegated Gordon to a 27th place finish and snuffed out his flickering hopes for the 2011 championship.

"I was going to go with (Casey Mears)," added the four-time series champion, "but when Trevor lined up behind me and agreed to (work together), I said, `He's got a fast race car and we have a history of working well together.' I thought it was a no-brainer, but I probably should have known better."

Gordon said Bayne approached him after the race and apologized, saying, "Hey, it wasn't me. That's what I'm being told to do."

"I just think it could have been handled better," Gordon said. "If somebody is going to screw you, you'd like them to say it to your face." 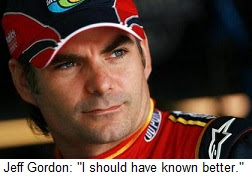 Tony Stewart, who lost preferred drafting partner David Gilliland to the Roush/Ford edict, said the move may produce an unexpected backlash for championship-contending Ford drivers. “Jack Roush went a little crazy… and I think that decision could come back to haunt him,” said Stewart. “There are a lot of guys thinking that if that’s the game he wants to play, we can make his life pretty miserable over the next five weeks, too.”

While Gordon and his fans are rightly upset with Bayne, Ford drivers were not the only ones looking out for their own Sunday. Gordon carried out his own version of “team orders” at Talladega, repeatedly remaining on track under caution in an attempt to prevent point leader (and Roush Fenway Ford driver) Carl Edwards from leading a lap. Fellow Hendrick Motorsports driver Mark Martin did the same.

While NASCAR “team orders” still fall well short of Formula 1 -- where drivers have pulled over and handed victories to championship-contending teammates -- it is clear that Sunday’s race ushered in a new and unsavory era of team and manufacturer collusion.

Bayne displayed his usual candor after the race, saying via Twitter that he was “strong armed” into abandoning Gordon in the final laps. “I would have rather pulled over and finished last than tell (Gordon) I would work with him and then be strong armed into bailing,” he said. “I'm not happy about what this has become. It's too premeditated. We should be able to go with whoever is around.”

After being criticized by fans on the social networking site, Bayne tweeted, “I agree. That's why I'm so sick about all this. I won't race restrictor plate races next year before I'm put in that situation (again).”

NASCAR is the only professional sport where teammates regularly compete against each other. It is also the only sport where opponents assist each other on the field of play. With tens of millions of dollars on the line, it is not surprising that savvy team owners like Jack Roush and Rick Hendrick have adopted an “us first” mentality in an attempt to win.

If only there was a way to make it seem a little less contrived.
Posted by Dave Moody at 11:08 AM