Ambrose Excited For Another Shot At Sonona 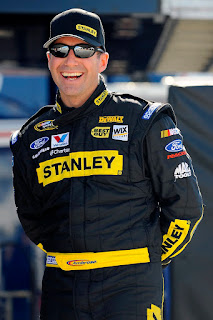 Recognized as one of the top road racing talents on the planet, Marcos Ambrose surprised no one by saying he looks forward to the NASCAR SPrint Cup Series' annual stop at Sonona Raceway this weekend.

“We’re all excited to come here,” he said. “It’s been a good track for me in the past, (but) there’s no certainty of success here. This is one of the hardest road course races you can go to. Our cars are very heavy, they’ve got a lot of power and they don’t stop very well. Grip is at a premium out there. The combination of tire, car and track makes the fall-off pretty extreme.


“Last year, we had the fastest car for one lap and got the pole position. We’d be the fastest car on the first couple of go-rounds on fresh tires, but we certainly didn’t have the endurance to keep the grip for the long run. That’s really what we’re working on this weekend, trying to make sure our car is good on lap 30 and not just lap three.”
Ambrose commented on the bare-knuckled mentality of the last few Sprint Cup road races, saying,  “The level of competition continues to get stronger in NASCAR. There’s more money in the sport and more at stake, so everyone is putting a lot of effort in. The level of driver (importance) on road courses is as high as anywhere I’ve seen, so there’s no gimme. There are at least 20 drivers that could win. It could be 30-odd drivers that have a chance to win.”
With everyone looking at him as a favorite to win Sunday, Ambrose said there is added pressure to perform.
“I’m very mindful that we’ve had a terrible year, “he said. “This is a really good opportunity to get our year back on track, so certainly there is added pressure there. I would love to be Top-10 in points coming into this weekend and just roll through it like a normal (race), but it’s not for us. We need to turn our year around and this is a good opportunity for us. We’re looking to break out and have a good weekend if we can.
Surprisingly, the former Australian V8 Supercar champion said NASCAR’s  new, Gen-6 race car performs similarly to its predecessor.
“It really drives very similar,” he said. “We were a little bit faster over the course of a single lap, so I think the trend continues where it’s a faster race car than the old style car we ran last year. But the balance and the challenges we’re fighting are very similar. There’s not a lot of difference, so we’re just going faster when it goes bad. That’s pretty much how it works.”
He also said the road course and superspeedway (restrictor plate) races offer an opportunity for smaller teams to claim their moment in the sun.
“This is a different style of race for the NASCAR Sprint Cup Series and… it allows some of the engineering to be taken away from the sport. When you’re running a one-and-a-half mile oval and the track is smooth and you’re working an aero platform, a lot of science goes into that to make us run as fast as we do.
“Here, these tracks are more about getting a car that’s comfortable, more linear and letting the driver do the rest. It’s the same with plate racing. If you’ve got a really slippery car in a plate race, you’ll get the pole position, but it’s no guarantee that you’re going to win the race because a guy who can work that pack better than the others can position his car and get himself pushed to the front at the end.
“They’re very different disciplines – superspeedway versus road course – but they both take some of the engineering out of the result.”
Posted by Dave Moody at 3:01 PM