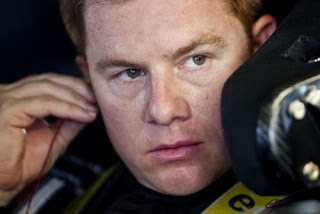 While the full report is not yet complete, officials say a failed torsion stop on the fifth lap of his qualifying heat race caused a torsion bar to become lodged between the right front wheel and the right front steering arm, causing the steering on Leffler’s 410 Sprint Car to lock up while running in second place. He lost control of the car exiting Turn Four and slammed into a concrete retaining wall, suffering blunt force trauma to the neck that led to his death.
Sprint Cup Series driver Dave Blaney, who also competed at the Bridgeport Speedway that evening but was not in Leffler’s heat race, said that specific parts failure is unusual.
“You just don't see that kind of thing very often,” said Blaney. “You don't forget it's part of (the sport), but it's rare.”
Posted by Dave Moody at 5:04 PM