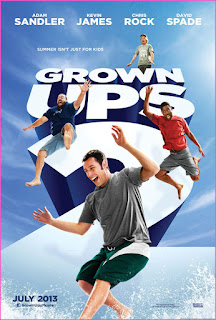 
Sandler, James and O’Neal will give the “Drivers, start your engines” command in the Independence Day holiday classic. They will also be introduced at the driver’s meeting, participate in pre-race ceremonies, and ride in the Grand Marshal cars during the pace laps prior to the green flag of the 160-lap, 400-mile race.
“We’re pleased to welcome three of the stars of ‘Grown Ups 2’ and have them take part in the pre-race ceremonies for one of NASCAR’s most exciting nighttime races,” said Daytona International Speedway President Joie Chitwood III. “Combining Adam Sandler, Kevin James and Shaquille O’Neal, we’re expecting a boisterous and powerful starting command in front of thousands of race fans and millions more watching on TNT.”
This marks the fourth time that Sandler has served as Grand Marshal for a NASCAR event, having previously served at Talladega once and Michigan twice. This will also mark Kevin James’ return to Daytona and his third time as NASCAR Grand Marshal; James also previously paced the Toyota All Star showdown and did a few test laps at Texas Motor Speedway.
In “Grown Ups 2,” the all-star comedy cast from “Grown Ups” returns (with some exciting new additions) for more summertime laughs. After moving his family back to his hometown to be with his friends and their kids, Lenny (Adam Sandler) finds out that between old bullies, new bullies, schizo bus drivers, drunk cops on skis, and 400 costumed party crashers, sometimes crazy follows you. “Grown Ups 2” will hit theaters on July 12, 2013. “Grown Ups 2” is directed by Dennis Dugan, produced by Adam Sandler and Jack Giarraputo, and written by Fred Wolf & Adam Sandler & Tim Herlihy.
Sandler, who is a producer on “Grown Ups 2,” has starred in such hit films as “Happy Gilmore,” “The Waterboy” and “The Wedding Singer” while James’ credits include the CBS sitcom “The King of Queens” and hit films “Zookeeper” and “Paul Blart: Mall Cop.”
O’Neal retired from NBA in 2011 after having captured four NBA championships during his 19-year professional career. He was also named NBA Finals MVP three times, was a 15-time NBA All-Star and earned an Olympic Gold Medal.
The stars of NASCAR return to Daytona International Speedway on July 5-6. Tickets to the Coke Zero 400 Powered By Coca-Cola NASCAR Sprint Cup Series race and the Subway Firecracker 250 Powered By Coca-Cola NASCAR Nationwide Series race are available by calling 1-800-PITSHOP or online at www.daytonainternationalspeedway.com.
Posted by Dave Moody at 3:56 PM