The No. 777 Plymouth Belvedere was unveiled on Friday, May 31, in downtown Nashville and returned to on-track action Saturday at Fairground Speedway Nashville. It originally competed at Fairground Speedway Nashville in the late 1960s, primarily in the Modified and Sportsman classes.
Robbins was an avid racer, making 35 career NASCAR starts with six Top-10 finishes, including the 1973 Firecracker 400. His best NASCAR finish was a fifth at Michigan in the June 1974 Motorstate 400, the only time he was ever on the leaderboard at the end of a Cup race. Robbins was partial to Dodges, owning and racing a series of Chargers, followed by a 1978 Dodge Magnum. His last race was in a Junior Johnson-built 1982 Buick Regal in the Atlanta Journal 500 on November 7, 1982, just one month before he died. In 1983, NASCAR honored Robbins by naming its annual Nashville Winston Cup race the “Marty Robbins 420.”
Evernham worked on the restoration of the No. 777 Plymouth alongside Marty’s son, Ronny Robbins and Nashville racing historian Al Jones, who owned the car previously. 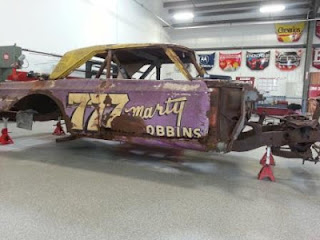 “Marty Robbins was such an icon for both the country music world and for NASCAR fans,” said Evernham. “When he was racing, he brought a whole new level of interest and style to the sport. Anyone who grew up as a race fan in the 60s, 70s and 80s remembers that purple-and-yellow race car. I’ve always been interested in Marty Robbins legacy, so when I had a chance to get this car and restore it, it was a dream come true.”
For Ronny Robbins, seeing his father’s racecar restored to its former glory and taking it for a few laps at the Fairgrounds was the ultimate tribute.
“It’s an unbelievable feeling to see this car again,” said Robbins. “It was one of the first cars I ever worked on, and I got to see it race at lot in Nashville. To take that car for laps, and think that my father sat in that seat, held that steering wheel and mashed those pedals, is an incredible connection to him. I’m so proud of his legacy and what bringing this car back means to our family and to his fans.”
Evernham found the car from an article in Vintage Oval Racing Magazine and tracked down Jones, who had purchased the car in 2010 after searching for it since the 1980s. A car painter in Nashville had tipped off Jones to the location in Murfreesboro, and when Jones arrived, he found it sitting in the bushes on its side, consisting mostly of rust and dirt.
“I love old cars, and have wanted one of the Marty Robbins cars since the 80s,” said Jones. “I was in the right place at the right time to get the car. It was meant to be. About the time I realized that I couldn’t finish the project like it needed to be done, Ray appeared and wanted the car. I knew he would do a great job, and it was the right thing for Marty Robbins’ legacy to get the car in the hands of a quality restorer. I was just the caretaker of the car for a few years, and I’m proud to have been a part of it.”
The restoration, unveiling and return of the car to Fairground Speedway Nashville will be featured on “AmeriCarna”, a car culture television show hosted by Evernham with guidance from friend, mentor, auto dealer, champion racing team owner and car collector Rick Hendrick. The pair will rely on their vast experience as “car guys” to take viewers back in time and introduce them to a period of history when the automobile heavily influenced American culture.
“AmeriCarna” will tell behind-the-scenes stories of lost race cars, barn finds, speed secrets, Hollywood films, historical racetracks and other unique places. Along the way, Evernham and his guests will meet the cars and characters that have shaped and preserved this history -- from the Appalachian Moonshiners that helped build NASCAR, to the West Coast Hot Rodders and Woody Wagon surfers that defined California Cool.
This unique look into America’s garage will debut on the Velocity Network on January 28, 2014 at 10:30 p.m. ET. For more information on the show visit www.AmeriCarnaTV.com. Viewers are also encouraged to learn more about Evernham at www.RayEvernham.com and follow him on twitter @RayEvernham.
Posted by Dave Moody at 11:05 AM