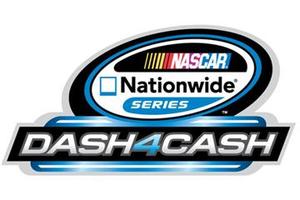 There will be more on the line during the NASCAR Nationwide Series “Feed the Children 300” at Kentucky Speedway on June 28 than in most races.


This year, the Kentucky race will serve as the qualifying event for the “Dash 4 Cash,” the beginning of the NASCAR Nationwide Series program that could result in a $1 million payout to one driver. Kentucky will determine the four drivers eligible to win one of the four $100,000 payouts that make up the program, beginning July 5 at Daytona International Speedway.
Following Daytona, the next three Dash 4 Cash races are July 13 at New Hampshire Motor Speedway, July 21 at Chicagoland Speedway and Indianapolis Motor Speedway on July 27.
Last August, Sam Hornish Jr. was the highest finishing eligible driver in the final D4C race at Iowa Speedway, which paid him and his fan partner, Tammy Altieri, $100,000 each.
“We had a lot of good races throughout that stretch last season,” said Hornish Jr., currently second in the NASCAR Nationwide Series standings. “We were finally able to win the Dash 4 Cash bonus at Iowa. For us, it is great because it is a nice bonus, but at the end of the day to be able to give the fan a $100,000 as well was awesome. She was so excited and it was truly life changing for her. Nationwide Insurance and their commitment to this series is unprecedented.”
Here’s how the Dash 4 Cash program works:
The top-four finishers in the Kentucky race who are eligible to receive NASCAR Nationwide Series championship driver points will qualify for the first D4C race at Daytona International Speedway.
The highest finisher of those four drivers at Daytona – he or she does not have to win the race – will win the first $100,000 D4C award and automatically qualify for the next event at New Hampshire. Additionally, the top-three finishing points-eligible drivers at Daytona will also qualify for the race at New Hampshire.
Those rules will apply for the remaining three events. If one driver wins the first three D4C awards and then wins the Indianapolis race outright, Nationwide Insurance will award the driver an additional $600,000 bonus, bringing the total payout to $1 million.
Fans can apply to be a part of the action by entering the NASCAR Nationwide Series $100,000 Sweepstakes at www.nascar.com/Dash4Cash. Four lucky individuals and a guest will receive an all-expenses paid trip to the final D4C event at Indianapolis Motor Speedway during Super Weekend at the Brickyard. The four fans will be randomly paired with the four eligible D4C drivers for that race, and the fan whose driver wins the D4C award will also go home with a check for $100,000, like Altieri did last year.
“The Nationwide Insurance Dash 4 Cash program is something that is unique to the racing community in general,” said top-five points contender Justin Allgaier. “I have not seen a title sponsor develop a program quite like this is. The money part is really cool, but the prestige and the want to win it is the biggest part. We’ve been fortunate to qualify for it several times, but I have also been on the outside looking in. I’m hoping this year we can qualify for all four races and go for the big bonus at the end.”
Posted by Dave Moody at 2:40 PM