Jeff Gordon was uncharacteristically sore last week, after hitting the Turn One wall during a multi-car crash at Charlotte Motor Speedway. Only after viewing a video replay of the crash did he realize the reason for his discomfort.


The Hendrick Motorsports driver, who has battled back pain periodically throughout his NASCAR career, called the Charlotte shunt "one of the hardest hits I've had in a race car," and said he cannot understand why unprotected concrete walls remain a part of race facilities at the uppermost levels of NASCAR.


“I got hit from the left… then hit the wall on the right, so I went from left to right,” he recalled. “I had no idea there was no SAFER barrier at that dogleg on the front stretch. It blew my mind that there wasn't one. There's one at the start/finish line, then it stops. And then there's one in Turn One that goes around to Turn Two. That kind of shocked me.” 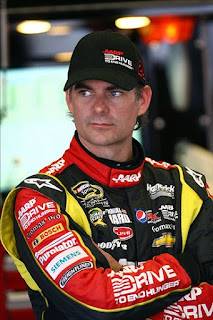 Gordon has had an uncanny knack for finding unprotected walls in recent seasons. In 2008, he clouted the concrete backstretch retaining wall at Las Vegas Motor Speedway, before riding out a similar crash at Richmond International Raceway in 2011 that measured 40 Gs on an in- car data recorder. Both tracks subsequently installed SAFER barriers in those areas, but Gordon wonders why – in 2013 -- there is any unprotected concrete left to hit.


"I found the (unprotected area) off of Turn Two 2 here (at Dover), and they haven't fixed that one," said Gordon. “Somebody in the Truck Series found it, too, and they haven't done that."
NASCAR CEO Brian France said recently that while the sanctioning body constantly reviews the need for additional SAFER barriers, it’s not as easy as padding every inch of available concrete.


"We think we have them in all the right places, and if we don't, we'll make an improvement,” said France, pointing out that some NASCAR tracks include road courses that utilize part of the NASCAR oval, making a single SAFER barrier setup impractical, or even impossible. Other types of racing – speedway motorcycles, for example – are not compatible with SAFER barrier technology.


"We're not the only thing that runs on a given facility," he said. “If it's a motorcycle event (like) MotoGP, that has to be considered.”


“We were all over the California circumstance,” said France of the recent crash by Denny Hamlin into an unprotected wall at Auto Club Speedway that left the Joe Gibbs Racing driver with a fractured vertebra that forced him to miss four races. "We look at that very carefully (and) when we need to put additional SAFER barriers anywhere, we will do it.”


Gordon said he has voiced his concerns to NASCAR in the past, and will continue to do so.


"I certainly said something (about Charlotte), and when I get the opportunity, I'll talk to others as well,” he said. “As I've learned in the past, they're going to look at those circumstances and make their calls based on (driver feedback). Me sitting down and having a conversation with them isn't necessarily going to change anything, but it doesn't mean it's going to stop me from doing it."


"I'm not anticipating any change," said Gordon of his latest high-speed impact. "I understand (NASCAR’s) theory is they go through their testing and see where multiple impacts have happened; highest impacts and those things.”
At the end of the day, however, Gordon said he fears the reason for NASCAR’s reluctance is simple.
"There's only one reason: cost,” he said. “That's it."