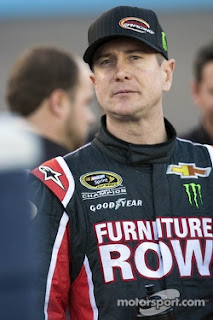 Kurt Busch said that while he is pleased with the recent performance of his Furniture Row Racing Chevrolet team, he knows they must continue to achieve at a high level to have any chance of making the Chase for the NASCAR Sprint Cup.


“It’s been a nice combination of really working hard and then testing a lot,” said Busch of his recent success, which includes a season-high third-place finish at Charlotte Motor Speedway last weekend. “We tested every other week in the month of May, so in the month of June, (it) will be nice to not have to go to other tracks during the week. That way, we can get caught up with things and really review and get more intense with the debriefs.
It was great month of May, with a couple of Top-5s, and now we jump into the summer stretch. I read that it’s only 14 races until the Chase cutoff, which is hard to believe. I’m like, `wait a minute the season was just getting started!’ But at the same time, here we are. It’s June 1 and away we go.
“The next few races will be tough for us,” admitted Busch. “Where we struggled was the tracks with fresh asphalt like Kansas and Vegas, and that’s what we have with Pocono and Michigan. We’ll see how that shakes out. If we can capitalize on the tougher tracks for us, that’s when we’ll fall into the groove where we need to be.
We just need to get our points with consistent finishes. We just have to be consistent.”
He said that in order to crack Victory Lane, he may have to modify his propensity to race hard from green flag to checkers.
“(I need to focus on) those last 50 laps,” he said. “It’s like football in the fourth quarter (and) baseball after the seventh inning stretch. Everybody changes the way they run. I’m a guy that runs intense every lap, and I was trying to carry that banner of racing hard every lap and giving it my all, 100 percent every lap.”
Busch also pointed to Furniture Rw’s close relationship with Richard Childress Racing as  key to their future success.
“(Kevin) Harvick, (Paul) Menard and (Jeff) Burton; having that teammate situation (is important),” he said. “We are legitimately the fourth RCR car, and it has been good to work with them and have the information running both ways. It was great to see them win (at Charlotte). We’ve had two really good runs at Richmond and Charlotte, (but) we didn’t capitalize and they did. It’s great to see a teammate capitalize at the end of the day and bring home the trophy to Richard Childress Racing.”
Despite ranking 18th in the Sprint Cup Series championship standings, Busch said he has not given up hope of making the Chase as a Top-10 point finisher.
“The Wild Card thing could get sticky with guys like Kyle, where they have two wins and need to fall back on that,” he said. “If you go for wins, then you’re going to run well and finish consistent. If you try to go for a win and gamble and get an 18th place finish, then you’re going to wish you went more for the consistent side of it.
“The way I look at the garage right now, consistency is what pays. That’s the way it’s always been. Raw speed is going to be the best way to make the Chase and that is what we have right now.
“We have to lean on that.”
Posted by Dave Moody at 2:02 PM