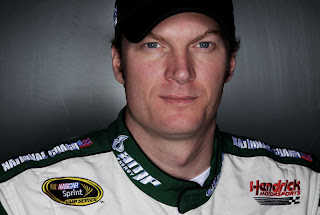 It’s no secret that some of Dale Earnhardt, Jr.’s finest days have come at Talladega Superspeedway. It’s also no surprise that NASCAR’s perennial Most Popular Driver comes to the Alabama oval brimming with the kind of confidence that a lengthy track record of success can breed.


“I really have had a lot of success here, a lot of great runs,” said Earnhardt today. “I always feel confident when we come here that we are going to have a good car (and) know how to use it. I think we feel that way coming in this weekend.
“We had a great run at Daytona,” he recalled. “I feel like as far as a company goes, Hendrick Motorsports has done a great job with this car at these particular race tracks. Our confidence level is real good, real high. (We’re) just looking forward to getting a little practice in (and) making sure everything is working the way it is supposed to. The weather here is going to be odd all weekend. Hopefully, we get an opportunity to race on Sunday and go to Victory Lane. We really feel like we have a good shot at it and feel like it is about that time for us to win one here at Talladega.”
Earnhardt said he continues to enjoy NASCAR’s new Gen-6 race car, while adding, “We are learning as we go. It’s hard to have a real good idea of what to expect every week. There is still so much to learn with this car that the competitive line is a moving target. Someone will find speed and force the rest of the sport to chase that mark down.
“The ante just getting raised, it seems, week after week. (There are) still a lot of questions about the new car. I think it’s been good for me and we have run well pretty much everywhere we have been.
The third-generation driver said he is “not sure exactly what to expect on Sunday; (what) style of event we are going to have, the style of drafting we will have and the way the race will play itself out. I think the asphalt has aged a little bit (and) hopefully it is getting slicker and slicker. It makes racing around each other a lot more challenging than it has been lately at the plate tracks. That should really separate the men from the boys.”
He also acknowledged that Sunday’s race could end with another vintage Talladega “Big One.”
“If I’m a fan, I think that is one of the best ways to end the race is… with a green-white-checkered,” he said. “Some of the drivers are putting themselves in position to make a move at a certain time… then those plans kind of go out the window with a green-white-checkered. You really have to scramble to put something else together, because you are going to line up behind another guy or a different person or be side-by-side on the restart. The plan you had is not there anymore, because there are different people involved.
“It’s really a challenge when the green-white-checkered (restarts) happen, to put something together and be able to trust the person you are working with, because they might not be a teammate of yours. They might not drive for the same manufacturer you do. So it’s really a big challenge and something that can really turn the race upside down.”
Despite a crash last fall that left him with a season-ending concussion, Earnhardt said he doesn’t worry about being swept-up in another incident Sunday.
“You go in with the mentality, ‘I’m going to put it together, I’m going to make the moves, the car is going to be there and we are going to make great pit stops.’ You still go in with the mentality that you are going to put together a formula that is going to win the race. You have to have confidence in what you are doing. If you are not making confident choices, or having confidence in what you are doing on the race track; that type of mentality sends you backwards.
You have got to make confident moves with assertiveness and conviction. That has a better result, more times than not.”
Earnhardt also said drivers need to accept that bad things can happen on superspeedways, and that to a certain degree, their fate is not entirely in their hands.
“Even though you know it’s really a lottery in some aspects, you still go in turning a blind eye to that part of it. Restrictor plate racing is a race where you can get swept up in something that is totally out of your control, totally random and at times, ridiculous. You can be so frustrated by how out of your hands (it is); how there is nothing you can do to avoid that fate.
“You’ve really got to be able to put that behind you,” he said. “You know that is a real possibility, much more than any other track. You have got to be able to accept that kind of result, move on and go to the next race.”
Posted by Dave Moody at 5:42 PM