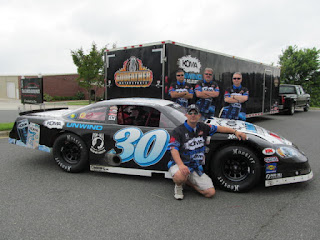 Jerick Johnson, Godfather Motorsports and the KOMA Unwind Chevrolet return to action Friday night at the Caraway Speedway in Sophia, NC in the Pro All Stars Series “Krazy Kevin Powell 150;” their fourth start of the 2013 season.


One of the most historic tracks in the Carolinas, Caraway was originally constructed as a dirt oval in 1966. The high-banked, .455-mile track was paved in 1972, and now hosts a summer long schedule of weekly events, as well  as multiple special events for the PASS and NASCAR  Whelen Southern Modified Series each year, culminating with the legendary North-South Shootout each fall.
“Caraway has always been one of our favorite tracks, despite the fact that we essentially destroyed a race car there a year ago,” said Godfather Motorsports owner Dave Moody. “You never want to tear up a car, but if you’re in the game long enough, it’s going to happen. Hopefully, Caraway owes us one after last year, and we’ll be happy to collect Friday night.”


About POW*MIA Awareness – Godfather Motorsports is proud to support the POW*MIA Awareness Campaign. Driver Jerick Johnson has long been an advocate for veterans’ rights and the United States military. He is a five-time Distinguished Guest of the American Legion National Convention and has earned numerous awards from other veterans’ organizations. Promoting and increasing public awareness of the POW*MIA issue has become his main goal. `Prisoner Of War: Missing in Action’ refers to any soldier taken prisoner by the opposing side during an action of war. It is not always known whether that solider is alive or dead, only that they are missing. Our goal is to remind our fellow Americans that the greatest tragedy of all is to be forgotten, and honor those who have given so much. Jerick thanks Godfather Motorsports for the opportunity to help increase awareness of this issue by carrying the POW*MIA logo on the No. 30 KOMA Unwind Chevrolet.
Posted by Dave Moody at 4:06 PM