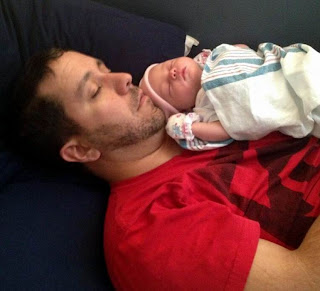 NASCAR Camping World Truck Series' championship leader Matt Crafton has some serious work to do between now and May 16, the opening day of practice for the series’ next race at Charlotte Motor Speedway.


Crafton and his wife, Ashley, need to ease their newborn daughter, Elladee Ann, out of her first favorite habit; catching a few winks on daddy’s chest.
"She's already so spoiled," Crafton said of his daughter's birth on April 26. "The only place she really likes to sleep is on my chest, so we're trying to wean her off that."
The birth of the Craftons' first child had them brimming with anticipation. But for the driver who assumed the Truck Series' points lead less than two weeks ago through a combination of his win at Kansas Speedway and a penalty to ThorSport Racing teammate Johnny Sauter, the reality of having a child is mind-boggling.
"Everybody tells you how it feels, how you're going to feel and how much you'll love having a child of your own," Crafton said. "But it's way, way more than I ever thought it could possibly be. It's indescribable, really."
Crafton laughed when describing his current state of mind as, "good, though maybe a little sleep-deprived." He said he and Ashley have alternating feeding (her) and changing (him), developing a smooth routine.
Asked how he thought things might change when the Truck Series gets back to racing, Crafton said he is still unsure.
"I wish I could tell you when it might level off," Crafton said. "I’ve got to go with business as usual as much as I can."
Back at the ThorSport Racing shops in Sandusky, crew chief "Junior" Joiner grinned when thinking of the circumstances surrounding Elladee's birth, which came just six days after Crafton's win in Kansas. At that race, Crafton scored the win in Joiner’s 26th race as crew chief. Elladee's birth on April 26th was icing on the cake for Joiner.
"Is that cool or what?" Joiner said last week, shaking his head and smiling as his wife walked into the shop carrying their own infant son. "I told you that was a magic number. When Matt called and told me it was 'go time,' I told him it was the 26th -- what else did he expect?
"The only thing that would have been cooler would have been if my son was born on December 26th, but that's all right. Grandpa's looking out for us this year. 26 was his number. It was the day I was born and my dad's number when he drove, so it was all pretty neat.
"I'm proud of Matt and Ashley, and I know they'll raise her to be a good little girl," he said. "I never thought I'd see the day that Matt could look that angelic. Never. But I can see he's already in trouble; just a few days old and she's already got him worked."