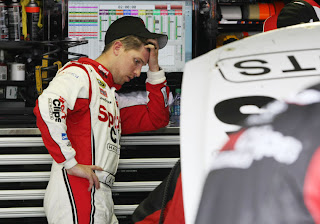 Denny Hamlin returned to full-time racing on the NASCAR Sprint Cup Series Saturday night, for the first time since suffering a compression fracture of his first lumbar vertebra in a crash at Auto Club Speedway in Fontana, Calif., last month.


After the race, Hamlin grimaced as he climbed from the cockpit of his racer; paying a price for his still-healing vertebra and the chronic, disc-related back pain he has suffered for most of his adult life.
“I’m sore and I’m tired,” admitted Hamlin. “I definitely didn’t feel any back pain. It was just more stamina that I had issues with.
“It just takes a while (to return to full strength),” he said. “Really, it’s like starting your season over again. To start over again at Darlington for 500 miles, there are some muscles that have gotten weak. I’m pretty sore and tired, mentally tired as well.”
Hamlin’s runner-up finish allowed him to close within 61 points of the Top-20, which is where he’ll need to finish the regular season in order to qualify for the Chase for the Sprint Cup. There’s another requirement for making the Chase, however. He needs to win races, and as good as Saturday’s night’s effort was, it did him absolutely no good in the win column.
A year ago, Hamlin won four times during the 26-race regular season. Now, with 16 weeks remaining before the start of the Chase, the Virginia native will likely need a pair of victories to claim his spot in the playoffs. That’s doable for a driver of Hamlin’s ability and a team as strong as Joe Gibbs Racing. They have the potential the claim a spot in the 2013 Chase, but the definition of “potential” is “ain’t done it yet.”
Hamlin will need more performances like Saturday night – and better – to make it happen, and with only 16 races left before Chase time, there is no room for driver error, mechanical failure or questionable race strategy. He’ll need to be pitch-perfect, every week, and after Saturday’s race, he made it clear that he is up to the task.
"I love the challenge," said Hamlin. “The less realistic it is, the bigger the challenge. We have a huge, huge hole that we’ve got to dig out of, but there’s nothing that wins can’t fix. That’s the bottom line. If we win a couple of races, we’re going to be Top 20.”
Posted by Dave Moody at 11:14 AM